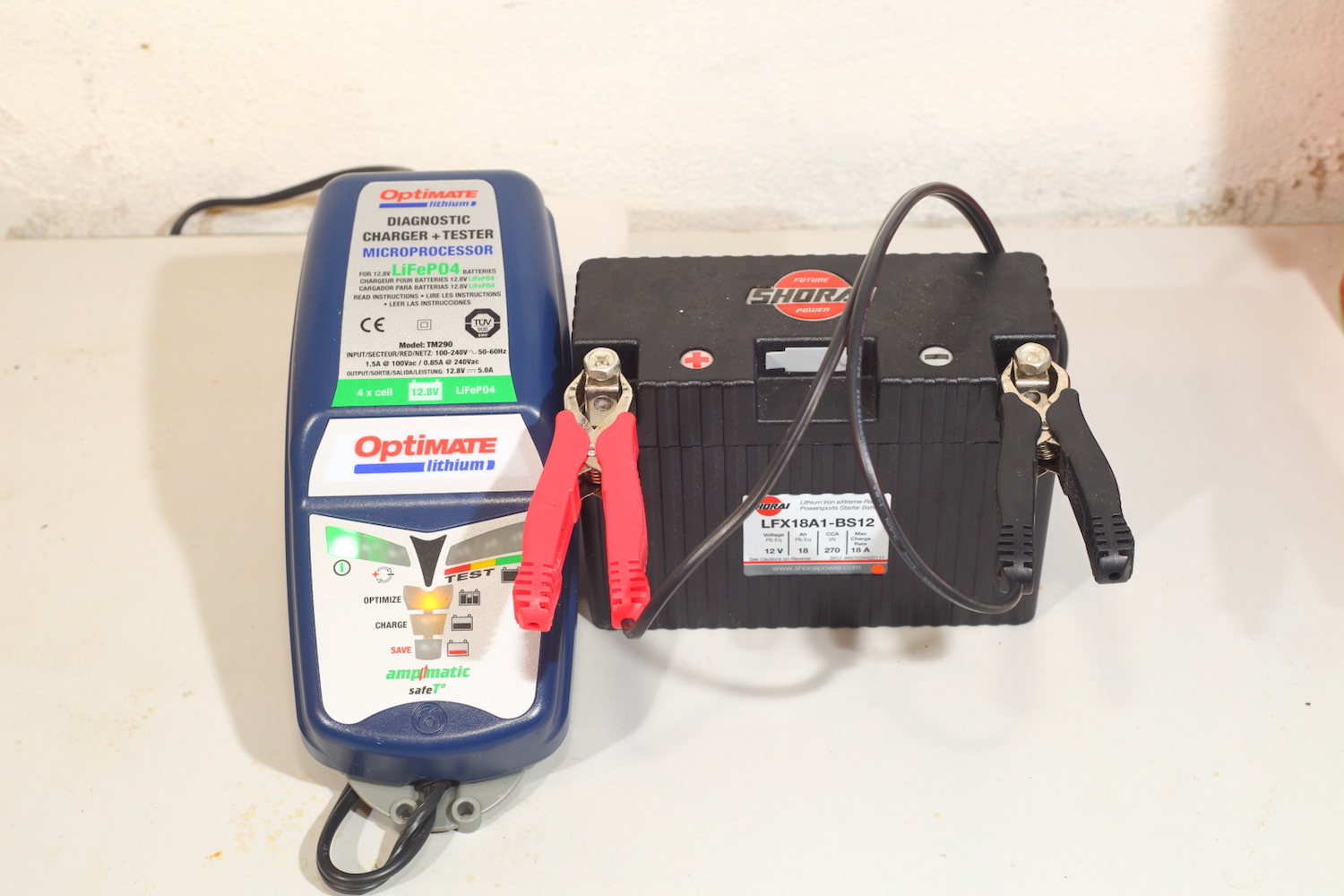 Keeping bike batteries in good order is a fairly involved process. As any proper geek will tell you, there’s a load of things to consider, from sulphated plates to deep discharge cycles, constant current charging and reverse-charged cells. Luckily for non-geeks though, Optimate has been helping folk keep on top of this nonsense since 1994, with its range of smart chargers that take much of the effort out of maintaining your bike’s battery. Microprocessor-controlled charging routines, with pulsating charge cycles and close control of voltage and current, can prevent, and even repair, damage to lead-acid batteries which have been commonly used on bikes.

But now there’s another type of battery technology which is becoming more common – lithium ferrous phosphate (LFP) chemistry. And, unsurprisingly, these batteries need a different type of charging regime for best results. The voltage and current requirements are different – and while a normal 12v battery charger will do the job in a pinch, a specialised lithium charger is recommended longer term. Lithium batteries are also expensive, so it makes sense to get the proper kit to look after it.

Enter this lithium-specific Optimate charger. As with all the other Optimates, it’s easy as pie to use – plug into the mains, and connect to the battery, either with the supplied croc clips, or via a permanently installed connector bolted onto the terminals (also supplied). A series of lights tells you if the connections are reversed, the state of charge of the battery, and how much current the charger is supplying.

I’ve been using it for the past four or five years, whenever I’ve been riding a bike with a lithium battery. I had a ZX-6R with a Shorai unit, and then put an Ultrabatt item on a long-term Suzuki Hayabusa test bike. The Optimate kept these in good order – indeed, the Ultrabatt battery is now powering my old Burgman 650 scooter, and has performed really well, even after four years of occasional neglect.

This charger is a high power unit, which puts out up to 5 amps when charging, which is a fairly high level for a bike charger. That’s because it’s aimed at folk using a lithium battery for a total-loss electrical system on a race bike. You can stick the bike on charge between track sessions, and the high current output will quickly top up the battery. Optimate also makes a cheaper, smaller 0.8 amp unit for £63, which is more suited to normal riders who need a trickle charger on a road bike that’s run regularly.
LiFePo units are becoming more and more common, appearing recently on the Honda Fireblade SP and Ducati Panigale V4 S. So more of us will be needing to keep them in good condition. And on the evidence of the past few years, the Optimate Lithium will definitely do the job.