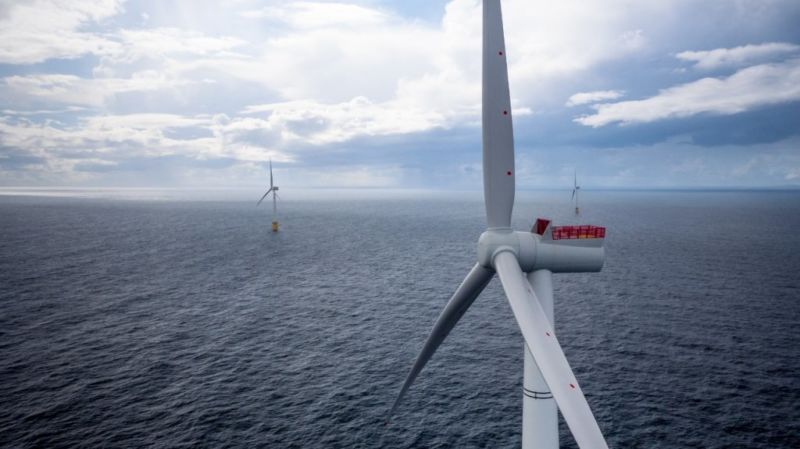 The world’s first commercial floating offshore wind farm, called Hywind, started sending electricity to the grid last October. Since then, the six-turbine, 30MW installation has been working well. Really well. In fact, Hywind has had a 65-percent capacity factor over the last three months according to Statoil, the Norwegian mega-corporation that built the wind farm off the coast of Scotland. (Capacity factor measures a generation unit’s actual output against its theoretical maximum output. A capacity factor of 100 percent means the wind farm would be sending 30MW of power to the grid every minute of every day since it’s been in operation.)

Of course, comparing Hywind’s 65-percent capacity factor in the winter, when wind is blowing at its hardest in Scotland, to the average capacity factor of other renewable installations over the whole year isn’t quite fair—we can assume that Hywind will have a lower capacity factor in months when winds are milder. But Statoil says that similar offshore wind installations achieve a capacity factor of 40 to 60 percent in winter, suggesting that there’s an advantage to be gained in floating wind farms: the turbines can be placed further out to sea where wind is more consistent and stronger.

Hywind in particular was built much like a floating offshore oil drilling rig, with the platform anchored down to the seabed using suction anchors. These eliminate the need to construct expensive fixed structures under water and allow Statoil and others to site the turbines farther out to sea in deeper waters. Hywind specifically is 15.5 miles out from Aberdeenshire, Scotland. At maximum capacity, it can power 20,000 homes.

Despite its “floating” moniker, Hywind is well-equipped to withstand violent storms without capsizing. The system performed as expected during the extreme storms that hit it over the winter. In October, the proximity of Hurricane Ophelia exposed Hywind to wind speeds of 125 km/h (80 mph), and later in December, another storm delivered “gusts in excess of 160 km/h (100 mph) and waves in excess of 8.2 m (27 ft).”

“Whilst the wind turbines shut down for safety reasons during the worst of these winds, they automatically resumed operation promptly afterwards,” Statoil wrote. “A pitch motion controller is integrated with the Hywind turbine’s control system and will adjust the angle of the turbine blades during heavy winds which mitigates excessive motions of the structure.”

Statoil and its partner Masdar are aiming to build more of these as costs come down and wind turbines get more efficient. By 2030, Statoil says, it hopes to bring the cost of floating offshore wind down to €40-60 per MWh ($50-74 per MWh).