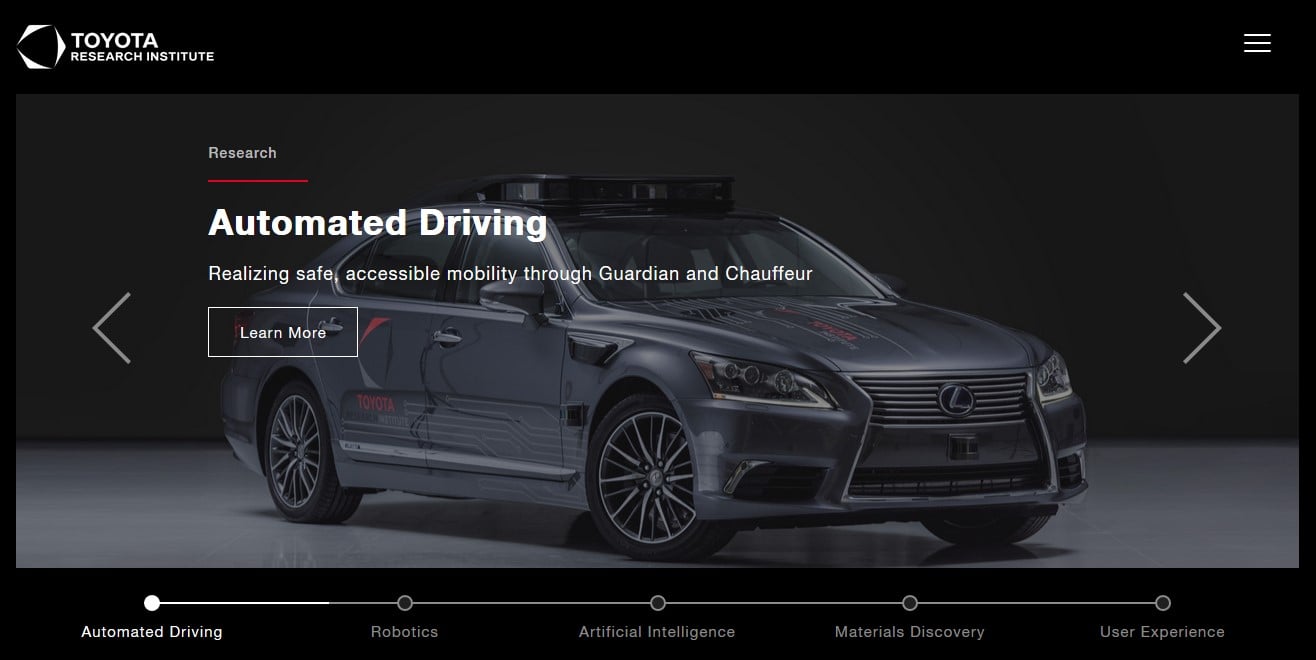 The Toyota Research Institute will focus on broader research applications, dipping their toes into material science work on advanced battery technology as well as making advancements in the field of robotics. The Advanced Development division, on the other hand, will be much more focused in nature – devoting all of their research towards the development of self-driving cars.

The Toyota Research Institute-Advanced Development, colloquially referred to as TRI-AD, will reportedly be staffed by as many as 1000 different employees, so it’s clear that Toyota has big expectations for this fledgling division. While the company isn’t necessarily new to the idea of self-driving cars, the expansion of this more specialized division drives home their commitment to becoming a driving force in this new industry.

In a recent statement, Toyota outlined their goals for the TRI-AD company:

Strengthen the collaboration within the Toyota Group in the domains of research and advanced development.

Recruit and employ top-level engineers globally, while cultivating and coordinating the strong talent within the Toyota Group.”

While the research of the original Toyota Research Institute was more academic in nature – focused on developing the future theory of automotive technology – the TRI-AD division will focus on bringing that same academic knowledge and applying it to a more consumer-facing format, bringing the dream of capable self-driving technology to Toyota vehicles and making it a viable competitor when it comes to the world of self-driving cars.

Currently, the main name that comes to everyone’s mind is Tesla when it comes to self-driving cars. There have been a number of competitors that have all offered their own take on the functionality, but as of now, there’s no other organization that has developed quite the reach that Elon Musk’s company has managed to cultivate. With some of the most advanced self-driving cars on the market – many of which are electric and still manage to hold their own in performance tests against traditional vehicles – there has yet to be another company that can threaten the dominance of Tesla when it comes to this fledgling industry.

However, an advantage that Toyota has when compared to Tesla is the long history of producing vehicles and the infrastructure to do so on a grand scale. There’s a high demand for Tesla vehicles, but they have yet to develop the sort of network they need to bring self-driving cars to the masses. As a brand with a far longer history in producing high-quality cars, Toyota stands to capture a significant portion of the market if they’re to develop a viable way of mass-producing reliable self-driving cars.

All in all, having a brand that can bridge the gap between cutting-edge research and applying said research to the development of actual self-driving cars may be what Toyota needs to get their foot in the door of this emerging market. While Tesla is the big player when it comes to this new technology, the industry is still in its infancy. Tesla vehicles are also largely viewed as luxury purchases, too, and a company with a lineup as wide as Toyota could serve to bring self-driving cars to the average buyer rather than the select elite. Toyota will be just one of many players in the coming years that will offer their own take on this exciting development in autonomous vehicles, and it’s better overall for the consumer with more names than Tesla to choose from when it comes time to buy a self-driving car.