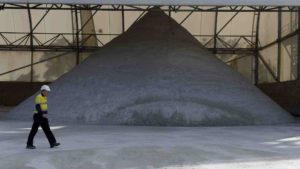 A warning from investment bank Morgan Stanley that new supply of lithium will swamp demand for a metal that has been prized for its role in electric car batteries sent shares in its two largest producers tumbling on Monday.

Shares in US-listed Albemarle closed down more than 7 per cent to $110.10, while those of rival SQM dropped more than 8 per cent to $53.71 after analysts at Morgan Stanley cautioned that the lithium price could plunge 45 per cent over the next four years.

Lithium has become one of the world’s hottest commodities, with its price more than doubling over the past two years, as forecasts that electric cars will dominate the auto industry proliferate. Elon Musk’s Tesla Motors, for example, is in talks with Chile’s SQM over a supply deal. A Tesla Model S uses more lithium in its batteries than 10,000 smartphones, according to estimates by Goldman Sachs.

But a debate over how much new lithium supply will arrive on the market — and how quickly — has muddied the outlook for the metal. Morgan Stanley estimates supply from projects in Argentina and Australia, as well expansion by the largest producers in Chile, may add around 500,000 tonnes per year to supply by 2025. The annual supply is currently at about 215,000 tonnes.

“We expect these supply additions to swamp forecast demand growth,” the analysts said, forecasting the price of lithium carbonate will fall from $13,375 a tonne to $7,332 a tonne by 2021 and then towards $7,030 thereafter. Prices for South American lithium are currently trading at $14,500, according to Benchmark Minerals Intelligence.

Carmakers are eager to establish a diverse source of supplies, rather than relying on one or two countries or companies. That is especially the case for China, which is developing its own lithium deposits. From a geological perspective, lithium is abundant and higher prices have encouraged producers to find new reserves.

Electric cars would need to reach 31 per cent of global car sales in 2025 from less than 2 per cent currently to offset the surpluses, according to Morgan Stanley, which downgraded its ratings on Albemarle and SQM to “underweight” from “equal weight”.

The two companies, which will report fourth-quarter earnings on Wednesday, are key to the future of lithium since they are the lowest-cost producers. Over the past year they have both secured an agreement with Chile’s regulator that allows them to expand production.

The speed at which they increase supply will determine lithium’s future. Chile has lost market share to higher-cost mines in Australia over the past two years due to a rapid increase in demand, especially from China, the world’s largest electric car market.

Morgan Stanley estimates Albemarle and SQM will add an additional 200,000 tonnes a year of lithium by 2025, increasing Chile’s share of the market to a third of global supply.

But other analysts say the two companies will not ramp up that fast. Joe Lowry, a lithium consultant, says SQM has little incentive to expand beyond an extra 50,000 tonnes required by its January agreement with the regulator Corfo.

“Morgan Stanley’s predictions of an additional 200,000 tonnes of supply from Chile by 2025 and a steep price decline is another demonstration of the ‘big name’ analysts not understanding lithium supply, demand or the cost curve,” Mr Lowry said.