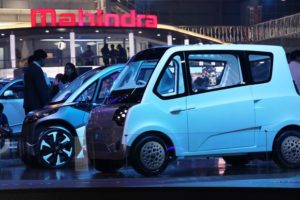 As part of the deal, LG Chem will supply lithium-ion cells based on chemical elements of nickel, manganese, and cobalt that will be deployed in the electric vehicles manufactured by Mahindra and its South Korean unit SsangYong Motor, the Indian company said a stock exchange filing on Monday.

“This association with LG Chem will give Mahindra the requisite access to advanced battery technology,” said Hemant Sikka, president of the Mumbai-based automaker.

Mahindra’s tie-up comes at a time when India aims to transition fully to electric vehicles over the next decade to curb rising air pollution in its cities. Last year, Prime Minister Narendra Modi’s government laid out a 15-year plan to electrify all vehicles by offering incentives and restricting the registration of automobiles that depend on fossil fuels.

Last year, state-controlled Energy Efficiency Services awarded a contract worth 11.20 billion rupees ($173 million) to Tata Motors and Mahindra & Mahindra to supply 10,000 electric cars that will replace over the next four years the fleet of petrol and diesel vehicles used by bureaucrats.

After bagging a part of the contract, Mahindra said it will manufacture all key components that go into electric cars in-house and committed 6 billion rupees worth of investments in technology and components for EVs.

The company already has a battery module plant under development in India. The plant will have capacity of half a million battery modules per annum and will also house a pack line, Mahindra said. The entire facility is likely to go into production in the last quarter of fiscal year 2020.

Though Mahindra has been one of the earliest entrants in the electric vehicle business through the acquisition of Reva Electric Car, it hasn’t been able to step up sales due to the slow pace of building charging stations. The government is now looking to set up 2,000 charging stations in state offices, further boosting the infrastructure for EV roll out.

Over the past few months, Mahindra has also been tying up with ride-hailing and cab-rental companies in India to expand the reach of its EVs. Earlier this month, it bought a 16% stake in Zoomcar Inc., the U.S.-based holding company of Indian car rental start-up Zoomcar.