Five years from now, the battery you buy could be the size of a refrigerator.

It could be the only thing you’ll need to power your home.

Researchers at the University at Buffalo and University of Rochester are collaborating on a prototype that uses sunrays on your roof and a cluster of liquid chemicals to store and reuse energy around the clock.

Researchers around the nation are working to refine ways to capture and store increasingly higher energy yields from wind and solar sources for use in applications as vast as the electrical power grid to as small as a home.

Cook’s lab – in collaboration with the lab of Ellen M. Matson, an assistant chemistry professor at the University of Rochester – recently struck what it believes is a significant research discovery: doubling the effectiveness of previous research into a type of battery called “redox flow batteries.”

The redox flow battery is not new per se, but Matson expects their discovery could “set a new standard in the field.”

“This is really an untapped area of molecular development,” said Matson, who initiated the study. “We’re taking a different approach to solving the problem.”

Redox flow batteries work by using energy sources – like wind or solar – to charge chemical solutions. Those charges can then be stored and can transmit power in a reverse electron exchange, researchers said.

They said the technology holds more promise because benefits come at lower costs with chemicals that are generally inexpensive, plentiful and safe.

“Since the search for higher energy densities largely drives redox flow battery research, this is a major step forward,” Cook said. “It ticked a lot of boxes that really hadn’t been seen before.” 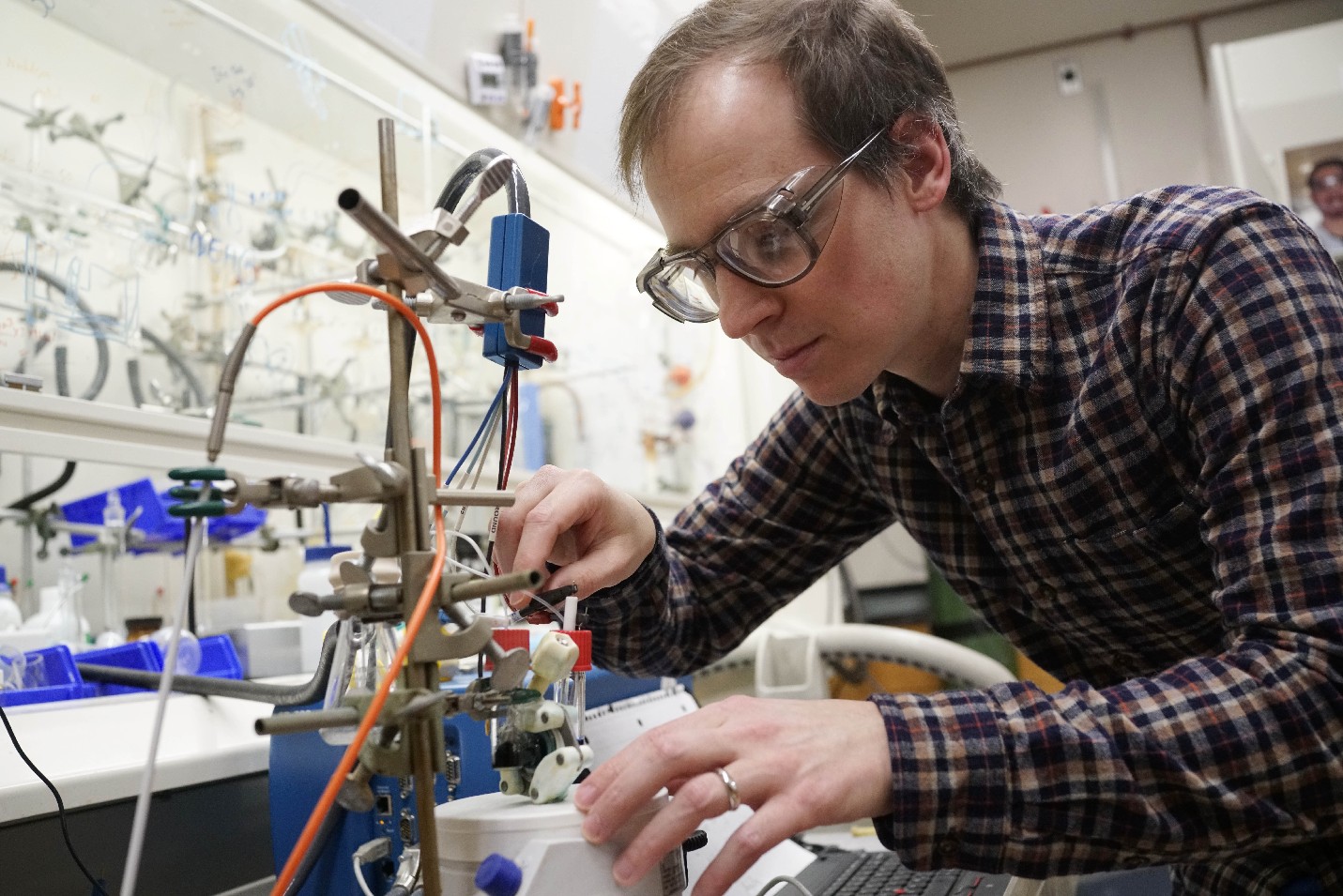 Timothy Cook, assistant professor of chemistry sets up a small redox flow battery he and his team are testing in his University at Buffalo laboratory. (Derek Gee/Buffalo News)

The theory and molecules were hatched in Matson’s Rochester lab.

Cook and a fourth-year graduate student, Anjula Kosswattaarachchi, did the testing at UB.

The battery prototype designed at UB looks like a couple metal-coated decks of cards stacked on end with wires and plastic tubes coming out from every which direction. Passing through it is the special liquid cluster comprising an ethanol reagent and cluster of metal and oxygen atoms.

“We’re really excited,” Cook said. “We really feel we understand the chemistry and how to do it.”

“It defines a whole new class of compounds that can be used for redox flow batteries.”

This type of battery shouldn’t be confused with the ubiquitous lithium-ion battery that’s made for compact, portable devices like mobile phones, tablets or personal computers.

Redox flow batteries are designed to be bigger – and to do bigger things.

“You’re not going to be using them for cellphones or cars,” Matson said. “We’re really focusing on grid-scale energy sources.”

Cook is confident his laboratory’s prototype can be upsized with relative ease. That’s because the chemical storing the charge is dissolved in a liquid which can be stored in external reservoirs, Cook said.

“It is very simple to change the capacity of a redox flow battery to meet a target application, as all you have to do is select smaller or lager storage tanks, no other part of the battery needs to be adjusted,” Cook said.

That said, researchers acknowledged more research and testing needs to be done.

Matson and Cook’s labs applied for a grant through the National Science Foundation with goals of advancing their collaboration and recent discovery.

“It’s a good starting point,” Matson said. “These molecules really do have the potential to be influential.”