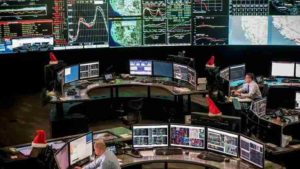 For the third time in three years, California energy officials are working to expand governance of the electric power grid to become a regional function covering as many as 14 states.

Opponents of the plan, which would fundamentally rewrite how electricity is managed across most of the West, are once again steeling for a fight.

Gov. Jerry Brown and key lawmakers are meeting with utility interests, labor groups and other stakeholders to build support for what’s called a regional transmission organization, or RTO.

Promoters of the expanded-grid concept say a multi-state system would allow California to sell excess renewable power like solar or wind to other states that rely on electricity generated by heavier polluters like coal and natural gas. They also say it will save money, create jobs and protect the environment.

“This also allows for a broader mix of renewables across the western region and provides tangible economic benefits by allowing for the export of unused renewable power, like solar, throughout the region,” Smith said in an email.

Holden has been circulating draft language for a bill that would create a regional grid to supplant the work of the California Independent System Operator, or CAISO, the Folsom-based nonprofit that now controls most of the state’s power grid.

Members of the CAISO board of directors are appointed by the governor. The RTO would be overseen by a board that answers to the U.S. Federal Energy Regulatory Commission.

Consumer advocates worry that marrying California to a regional system would cede state oversight of the transmission network to federal political appointees who do not always agree with California energy policies.

After Minnesota banned the import of coal-generated electricity, for example, federal judges ruled that the Midwest Independent System Operator had jurisdiction over how power is created — not state officials — and reversed the ban.

“Based on the evidence presented so far, we don’t see that turning the CAISO into a regional entity would produce compelling benefits for California ratepayers or the environment,” said Matthew Freedman, a staff attorney at the Utility Reform Network or TURN. “We remain deeply concerned about the potential risks to California’s sovereignty.”

The idea of a multi-state grid was first proposed as part of the 1990s legislation that deregulated the California energy market. It was suspended after electricity rates skyrocketed due to price manipulation by some traders and cost consumers tens of billions of dollars.

Loretta Lynch, who served as the California Public Utilities Commission president during the state energy crisis of the early 2000s, said an expanded grid could again damage ratepayers by eroding their rights to participate in public hearings and access public records.

“The new Holden bill amendments are designed to make it look like California will retain some power over the new RTO board and also that some public participation will be mandated,” she said. “Talk about putting a finger on the scale of transparency … this is more like an iron fist for secrecy.”

The regional grid plan was reintroduced in a 2015 bill that requires California to produce at least half of its electricity from renewable sources by 2030.

The effort stalled in 2016 amid concerns that it would take away California’s ability to dictate what sources of electricity it generates and consumes. Other states in the proposed RTO rely more heavily on power generated by coal and other fossil fuels.

Last September, in the final days of the 2017 session, the proposal was inserted into legislation on a Friday night without public deliberations. Holden withdrew the bill days later, after the proposal received media attention and consumer advocates and other groups protested.

The latest effort says it would “protect and preserve a state’s authority over matters regulated by the state, including procurement policy, resource planning and resource or transmission siting within the state.”

It also would delegate authority of grid operations to an RTO board, a structure that includes representatives of utility interests in other regions.

“What would change is the governing board, which would not be solely directed by California,” Smith said.

Holden’s answer to preserving some governance authority for California is creating a committee to advise the RTO board with three members appointed by the governor. His draft bill also would “limit conflicts of interest by prohibiting any member of the governing board from directly owning any interest in energy related assets.”

Lynch and other critics say that language does not go far enough to prevent abuses.

“Why put California at risk?” Lynch asked. “Why turn the clock back and embed in California law less transparency, no outright prohibitions against personally profiting from being on an RTO board and enabling those same people to make rules that profit their former employers?”

Jan Smutny-Jones is the chief executive at the Independent Energy Producers Association, a Sacramento trade association that supports a multi-state power grid. He called the Holden plan “a big win” and said it will not affect the role of the Federal Energy Regulatory Commission or California’s clean-energy laws.

“All other (regional operators) have less state involvement. All are subject to FERC tariff approval,” he said. “It is important to stress that the FERC has expressed no interest in restricting California’s RPS (renewable power rules), GHG (greenhouse gas) goals or energy efficiency standards.”

The regional grid plan would require approval from governors and lawmakers in the other participating states — support that was not immediately forthcoming when the idea was brought forward in 2016.

Regions that rely on fossil fuels to create most of their electricity worry that under a multi-state grid California could impose its environmental policies on them or seek to dictate what sources they could use to generate power.

In a Feb. 9 letter to a Utah lawmaker, attorneys in Salt Lake City offered to challenge California’s existing restrictions on coal-fired power — for $2 million.

“California carbon emission offsets currently result in a $28/ton adder for every ton of Utah coal used to generate electricity for export to California,” the confidential sales pitch from the Snell & Wilmer law firm states. “After 2027, California entirely bans the import of coal-fired generation.”

No decision on the expanded grid proposal is imminent. Comments on the draft legislation being circulated by Holden are due Wednesday.