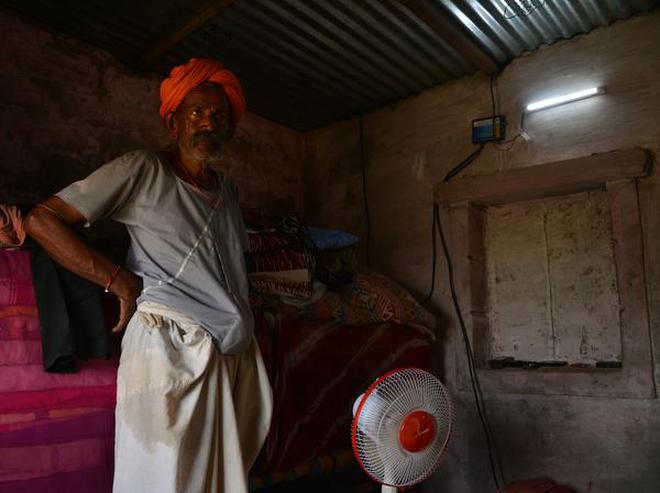 The shift towards lithium ion batteries from the older technology of lead acid batteries has allowed firms like Kaho India Private Limited to help the Centre achieve its rural electrification target even in areas beyond the reach of the grid.

Kaho India Private Limited, started in 2012, seeks to provide last-mile energy access through compact solar modules to areas that are so far not connected to the grid. “For instance, in Chhattisgarh, there are various tribal regions with no electricity and the grid cannot reach there maybe for the next 10 years because even roads cannot be built there due to the high intensity of LWE (left wing extremism) activities,” Subhag Jain, CEO, Kaho India Private Limited, told The Hindu.

The device, developed by the company, can power three lights, one fan, one phone charger and has a socket to power a DC-power television. The firm provides all the related appliances as well, except for the TV.

The firm had initially developed a unit using lead acid battery but found that the short lifespan of these batteries rendered the entire product all but useless.

“We imported 10 units for our first try in 2012, and they got sold in no time,” said Mr. Jain said. “At that time, it was priced at ₹5,000. But everybody complained that these systems don’t work.

“We were in a state of shock and excitement that a ₹5,000 product is selling like hot cakes in spite of the customer knowing that they don’t work. Then, we stopped all commercial activity and got into an extensive R&D programme to understand why they don’t work, and what we need to do to get them to work reliably,” he added. “It took two years to identify that the problem was with the battery.” The problem, Mr. Jain explained, was that while the solar panel in the unit had a lifespan of 25 years, the lead acid batteries had a lifespan of only 2-3 years.

Subsequently, the firm began looking at other battery options and settled on lithium ion batteries.

“This solved a lot of problems for the customer as well as for a lot of government schemes as well,” he said. “In lead acid batteries, the typical calculation is that you have to put 8 VAh per peak watt of solar panel. In lithium ion, you need to do 4.8 VAh per peak watt. So, you have the size benefit. In a smaller package, we could put in more storage, so it also became cheaper for the government on a per-energy cost basis.”

However, the introduction of the more efficient battery technology was accompanied by a rise in the price of the product. This, though, was not much of a problem for the firm because it decided to sell its products to the government instead of to individual households.

“Now, it priced at ₹50,000 per unit,” Mr. Jain said. “But the government is buying them now under the REC plan and the Saubhagya scheme.”

Another benefit of using lithium ion batteries was that they were much lighter than lead acid batteries, a key issue when delivering these units to remote locations. Also, the charging time had reduced by half with the introduction.

“Lead acid battery is said to be charged at what is called a c/10 rate, that is, it has to be charged for 10 hours,” Mr. Jain said. “In lithium ion batteries, there are certain technologies where you can charge the battery in 10 minutes,” he added.