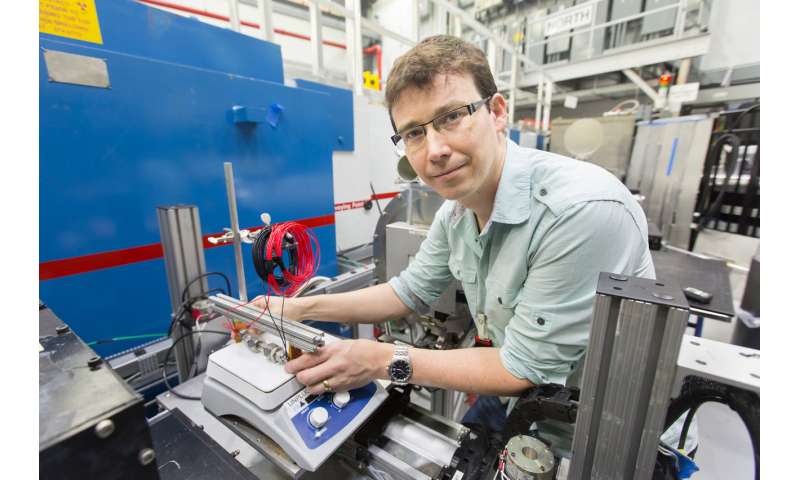 Researchers are using neutrons to study a battery material that could offer a safer alternative to the flammable liquid component found in most types of lithium-ion batteries.

Rob Schmidt, a postdoctoral researcher at the Department of Energy’s Oak Ridge National Laboratory, and his collaborators are using neutrons at the lab’s High Flux Isotope Reactor (HFIR) to study a solid-core garnet material as a possible substitute for the flammable liquid cores often used in lithium-ion batteries.

Batteries contain a core material known as an electrolyte that allows ions to travel between the positive and negative ends of the cell to maintain a balanced charge. However, most of the liquid eletrolytes used today in lithium-ion batteries are flammable. Schmidt is investigating a solid electrolyte material for potential use in the next generation of lithium-ion batteries for increased safety and reliability.

The team is using CG-1D’s high sensitivity to lithium to track the lithium ion progression across the electrolyte and to observe the conditions that lead to the formation of unwanted dendrites. Dendrites, thin lithium metal filaments that can form inside battery cells, degrade battery performance by creating unwanted variations in electrical current distributions.

“Lithium is a soft metal material, so a lithium dendrite is able to go through liquids pretty easily, which makes it easy for batteries to short out,” said Schmidt. “Lithium shouldn’t go through a stiff, ceramic-like material like the garnet material we’re studying, but it does. We want to know why and how it does that.”

Schmidt hypothesized that the first step to failure is too much ion current in one area, followed by the formation of dendrites in areas that have greater lithium ion current density. The dendrite could create an easier path for ionic charges to move along than the electrolyte. A partially formed dendrite concentrates ion current toward that easier pathway; once the dendrite fully forms between both electrodes, it creates an internal electrical short circuit.

“You really can’t see dendrites well by probing with x-rays, but with neutrons, you can see where lithium absorbs neutrons really, really well,” he said.

If neutrons can help the team to better understand how dendrites form, they may be able to inform the design of new and ultimately safer batteries.