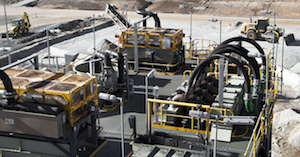 According to Benchmark Mineral Intelligence, Tesla’s new Nevada “gigfactory” will need an estimated 24,000 tonnes of lithium hydroxide annually out of a market of 50,000 tonnes.

Tesla is only one of several competing manufacturers. Volvo and General Motors are also planning dedicated lines of electric vehicles. Lithium supply security continues to be a top concern for battery technology companies. Currently, most of the lithium supplied to the electric vehicle battery markets comes from South America or China.

With an eye toward lowering production costs, Tesla and its peers are seeking out stable, affordable and domestic sources of lithium. This effort involves partnerships with resource companies, such as Tesla’s supply agreement with Pure Energy Minerals.

While Benchmark Mineral Intelligence forecasts that lithium hydroxide demand will surpass 150,000 tonnes by 2025, global production of lithium in 2016 is estimated at about 35,000 tonnes — meaning demand will exceed production in less than a decade unless other sources come online.

Due to their simple metallurgy, the spodumene or lepidolite lithium ores found in LCT-type deposits can be rapidly moved from exploration to development and can be easily converted into important lithium concentrates used in an array of industrial applications, including batteries for electric vehicles and mobile electronics.

Pegmatites form when mineral-rich magma intrudes into fissures in a continental plate. As the last of this magma cools, water and other volatiles become concentrated. These metal-enriched fluids catalyze rapid growth of the large crystals that distinguish pegmatites from other rocks.

Pegmatites form thick seams called dikes that intrude into otherwise-barren country rock and can measure anywhere from a few to hundreds of meters across. In some places, these brightly colored dikes stand out like bands of icing sugar between pieces of layer cake. For miners, pegmatites possess a certain sweetness because of their large crystal sizes and amazing mineral diversity.

“Coarse, well-defined and well-mineralized pegmatite allows you to develop a very effective shallow surface mine,” said Ian Graham, an accomplished mining professional with nearly three decades of experience in the exploration and development of mineral deposits, mostly with major mining companies Rio Tinto and Anglo American.

Hard rock lithium mining also has few environmental risks that may hold up permitting. With big, stable crystals extracted through conventional means, LCT pegmatites provide a relatively “dry” and thus safe source of lithium. Although miners sometimes encounter uranium, or beryl and fluorite — both known to be poisonous at high concentrations in drinking water — waste rock from LCT pegmatite mines differs little from ordinary rock and soil. According to a 2010 US Geological Survey report, “neither lithium-cesium-tantalum pegmatites nor their parental granites are likely to cause serious environmental concerns.”

Hard rock lithium has strategic advantages in dynamic lithium markets compared to brine deposits. Extracting lithium concentrate from brine waters involves evaporation in large ponds, which may take over a year or more. Hard rock lithium, on the other hand, is easier to explore, mine and process using low-cost mining methods.

Concentrated ores across a narrow surface expression make pegmatite dikes “very simple to map and mine,” said Graham. Greenbushes in Western Australia is a simple open-pit mining operation. The high-quality lithium ore, grading 1.2 percent lithium, is processed into a range of lithium concentrates onsite. These concentrates can be easily packaged and shipped over large distances to market.

Even in lithium mining, grade is king

LCT pegmatites are by their nature small deposits — which makes large finds like Greenbushes (thought to contain almost 1 million tonnes of lithium) very valuable. According to Graham, most pegmatites need grades like Greenbushes — 1 percent lithium or better — to justify development.

“Grade is still king,” said Graham. “You want coarse, well-defined and well-mineralized pegmatite with reasonable strike lengths. If the pegmatite is developed over a wider expression, that’s even better because it means more tonnes in situ and easier mining.” He noted that deposits that are farther from infrastructure — such as all-weather roads and grid power — will need to be higher grade and larger in size to be economically viable.

“However, one of the things I’ve seen as a diamond explorer is that high-value deposits justify development even in remote circumstances, such as the middle of the Northwest Territories, well away from infrastructure,” Graham said. “Smaller, high-grade operations can make for profitable mines across the commodity spectrum.”

Increasing demand for lithium is in turn increasing the search for LCT pegmatite deposits, especially in North America, where the burgeoning lithium-ion battery industry is in dire need of reliable and secure lines of supply, and the only active lithium mine is the Silver Peak brine lithium mine in Nevada. Easily accessible, highly mineralized deposits rich in lithium give exploration companies a chance to cash in on rising lithium demand spurred by accelerating electric car battery production, said Graham.

When it comes to the consideration of promising lithium exploration plays in the region, Graham noted that each lithium project — brine or hard rock — needs to be assessed on its own merits. As with any other mining project, investors need to look at grade, infrastructure and jurisdiction.