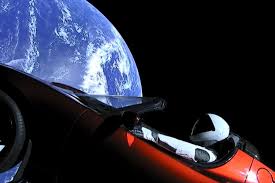 The Falcon Heavy, SpaceX’s most recent rocket, sent a 2008 Tesla Roadster into space. This means that among the man-made objects aliens can now discover, such as the Pioneer, Voyager and New Horizons probes, there exists a Tesla Roadster.

Sending a convertible into space – while possibly bad for its pollution of our interplanetary environment – is, well, pretty funny. Aliens will most likely praise us for our Tesla’s visually appealing design, 375 V lithium-ion battery, and 9,000mph interplanetary speed. They might, however, judge us for our neglectful decision to endanger Starman to radiation, micro-meteoroids, and solar storms in an open-top convertible rather than in an enclosed car.

Jokes aside, SpaceX’s Falcon Heavy is an incredible achievement for space exploration that should remind us to be optimistic and strive for seemingly impossible tasks.

Considering SpaceX is a private company, it is remarkable that their rocket is better and cheaper than its competition, which includes NASA, defense contractor giants like Lockheed, Boeing and several international aerospace programs. The accomplishment exemplifies the tenacity of the company’s leadership and employees.

As a result of this tenacity, our generation gets to witness the start of a new space race. As traditional defense contractors and more and more startup companies compete with SpaceX, space exploration will become cheaper and more accessible. All the while, I believe that SpaceX will continue to set the bar higher and higher as they strive towards their goal of enabling colonization of planets.

Sending Starman and a Tesla into orbit isn’t the extent of what the Falcon Heavy’s success represents. What’s incredible is that SpaceX was a startup company competing against the same companies that sent a man to the moon. SpaceX’s efforts have led to reinvigorating one of history’s most romantic technological developments, space exploration.