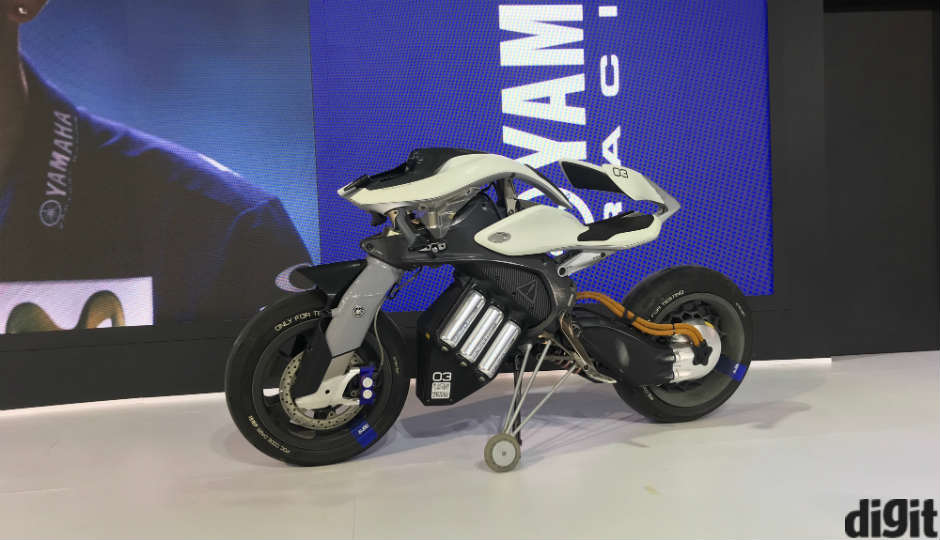 Last week, the 2018 Auto Expo in New Delhi saw Yamaha’s cutting-edge Motoroid prototype being paraded across its stage. A proof-of-concept of technology that is expected to appear in production in future, the Yamaha Motoroid is the pinnacle of the Motobot concept that the company has been working on since 2014. The prototype has been built on a new, customised chassis platform to accommodate an all-new way of motoring, and has a slew of technologies that may one day become commonplace.

While the name is suggestive enough of its droid-like existence, the looks further accentuate its stance. The Yamaha Motoroid, like most motorbike concepts, does not look anything like what you may have seen around. The weight of the bike – the six Lithium-ion battery cells and the electric motor – is placed as to lower the centre of gravity as much as possible. Essentially, lowering the centre of gravity of a travelling object exerts more force downward than towards the trajectory of the bike during curves and sharp turns, in comparison to a lighter bike with its powertrain placed higher from the ground. This very aspect is crucial to make the bike more stable, and for a bike that needs to balance itself, it is of tantamount importance.

Then comes the body panels. The Motoroid’s front panel is swept further back than in usual motorbikes, and the two-pronged front does not have a visor to restrict wind impact on rider at high speeds. This allows the bike to channel wind flow cleanly along its handlebars, the seat podium and along its lower end. This exerts further downward force that ensures stability for the Motoroid at higher speeds. However, the laws of physics are only being used to the technology’s advantage here, and the central controller on the Motoroid is what Yamaha has had to establish from scratch. This controller is called AMCES.

AMCES is Yamaha’s proprietary technology that makes use of sensors and electronic balancing equipment connected to a central controller to stabilise the bike, maneuver bends and turns, and go about by itself. AMCES divides the bike’s chassis in two halves – the main chassis and the sub-frame, and actively controls the balance and force ratios of the two halves of the frame to keep the bike upright. Yamaha explains, “The basis for Motoroid’s balance control is the inverted pendulum, where using the information of the angle between the axis perpendicular to the ground and the vehicle inclination, and the inclination of the pendulum, the actuator controls the vehicle’s self-balancing function.” This explanation becomes clearer when you look at the diagram below:

The AMCES module uses its onboard sensors to actively measure the inclination of the main frame to the ground. This is then computed by the onboard central controller, and the algorithms then enforce the actuator to adjust the bike’s balance. All of this is done actively, in multiple counts every second to ensure that the bike never loses balance, and hence simulate the active balancing that a human body can do with a motorbike. 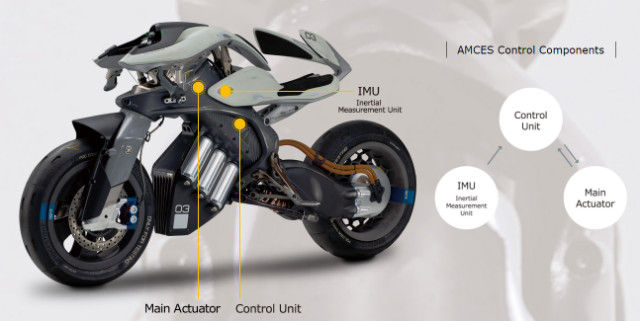 This is further ingrained with AI and machine learning algorithms, which allows the bike to learn routes, and hence optimise its balance by predictively gauging its inclination. However, Yamaha has not disclosed so far if its AI and ML algorithms are paired to a geo-sensing module to gauge routes via GPS coordinates, and neither has it disclosed the computing platform on which its autonomous balancing controller is based on.

Alongside AMCES, the Yamaha Motoroid uses AI algorithms, along with a high resolution camera mounted to its front, for image and gesture recognition. The Motoroid uses an image processor to collect data for facial recognition and gestures, and sends it to the central controller to actuate an action. These actions range from unlocking the bike and standing up on recognition of a face, to responding to hand waves to move towards a rider, stop or go back and switch off its powertrain.

Facial recognition technology is not particularly recent, and with a major chunk of the automotive industry proposing the use of facial recognition for keyless entry and operation in future, it is hardly surprising that Yamaha aims to use the same in the Motoroid. With AI-enabled gesture recognition, the Motoroid can presumably learn new gestures when it makes it to production, which will thereby give owners a level of customisation and more functionalities with varying levels of complexity. This, too, is in line with the industry’s trend of setting up for more personalisation of mobility, where a car or motorbike of the future is expected to become a more personal belonging to the owner by responding exclusively, recognising driver/rider emotions and enforcing varying levels of autonomous control depending on the driver/owner’s condition.

The Yamaha Motoroid also comes with a haptic HMI (human-machine interface), which does not only provide an interface for the Motoroid’s owner to interact with the motorbike, but also engage the owner with a wider range of feedback. While Yamaha has not yet provided the exact specifics, the Motoroid will be able to respond via voice, vibrations, and audio-visual alerts. The haptic HMI does not restrict itself to the bike’s infotainment setup, but also includes the seat podium. Here, the bike opens up the gantries that support the rider when he/she approaches the seat, and once the person is seated, they close back to perfectly suit the rider’s stance and posture, thereby being versatile and flexible to a wide range of owners. 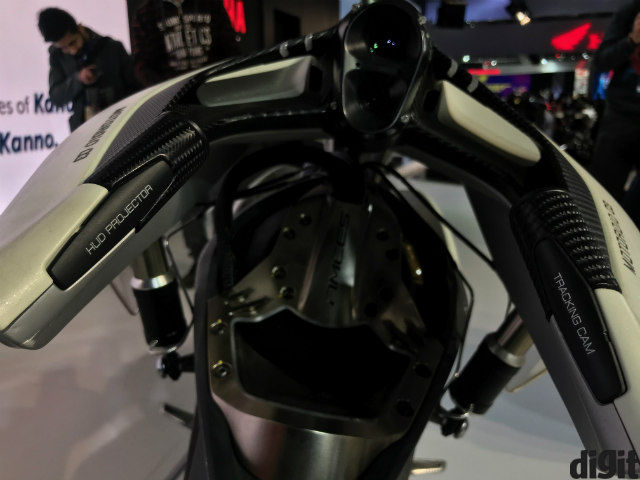 One aspect that Yamaha does not exhibit yet, but is part of the Motoroid’s technology kit is the augmented HUD projector, which is mounted to the front alongside the camera. The HUD projector will project infotainment details in thin air, which may then be controlled via gestures and/or voice. This is essential, as the Motoroid does not have a display panel, and the holographic projector will replace the need for having a display on board to show details when the bike is in motion.

The Yamaha Motoroid is, of course, fully electric, with a rear wheel-mounted electric motor and six shiny cans that are actually the batteries. The bike borrows its autonomous aspirations from its Motobot concept brethren, and while it is certainly not the first time that Yamaha has dabbled with new technology and autonomy, it certainly is the first real implementation of artificial intelligence that Yamaha has done with a motorbike. 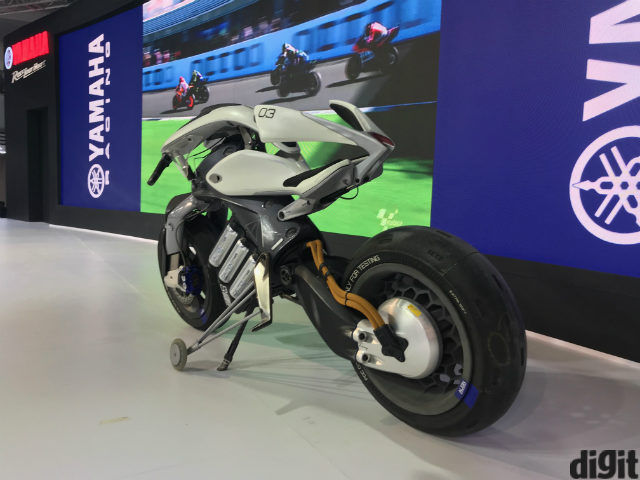 The Motoroid debuted at the 45th Tokyo Motor Show, 2017, and is among the very first autonomous motorbike concepts to have come to India. Production plans, however, are not in sight just yet. The technology itself is still far away from being implementable on standard roads, and as it stands, the laws governing two wheelers will not make the Motoroid a road-legal vehicle for at least the near future.