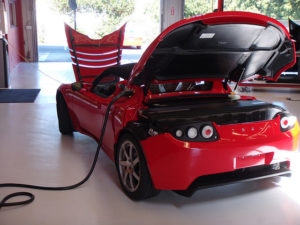 In June 2014, Tesla broke ground on its Gigafactory battery plant in Sparks, Nevada. When the massive factory is finished, the company expects it to produce 35 gigawatt-hours (GWh) of capacity every year, nearly doubling the entire world’s current battery production.

Peter Carlsson, CEO of Northvolt and a former chief purchasing officer for Tesla, wants to build his own Gigafactory-like plant in Europe, and Monday, February 12, the European Union’s investment bank approved a €52.5 million ($62.9 million) loanthat will fund the construction of a demonstration line in Västerås, Sweden.

If all goes well, Northvolt’s goal is to complete construction on the factory in 2023, at which point it will be able to produce 32 gigawatt-hours of storage per year, making it the largest lithium-ion battery factory in Europe.

The world will need to transition away from fossil fuels and toward renewable sources of energy to have any hope of combatting the effects of climate change. Meeting battery demand is an essential part of that process, but right now, Europe isn’t keeping up with Tesla and Asian manufacturers in terms of battery production.

Lithium-ion remains the most widespread battery technology in use today, thanks to the fact that products that use it are both portable and rechargeable. It powers everything from your smartphone to the “world’s biggest battery” in South Australia.

Demand for batteries is expected to accelerate in coming decades with the increase in deployment of electric vehicles and the need to store energy generated from renewable sources, such as solar photovoltaic panels. But rising concerns about mining practices and shortages in raw materials for lithium-ion batteries – as well as safety issues – have led to a search for alternative technologies.

Many of these technologies aren’t being developed to replace lithium-ion batteries in portable devices, rather they’re looking to take the pressure off by providing alternatives for large-scale, stationary energy storage.

Australian companies and universities are leading the way in developing innovative solutions, but the pNorthvolt’s factory could provide the continent with a local source of batteries while also driving down global costs. Currently, batteries account for 30 to 50 percent of the price of an EV, but if more competitors enter the space, that figure could drop dramatically, helping speed up EV adoption. Cheaper batteries could also encourage more people to switch to renewables to power their homes.

Carlsson will need to move quick if he want to establish a foothold in Europe, though. Musk already has plans to build as many as five more Gigafactories, including at least one in Europe, and there’s a reason Tesla’s CEO isn’t afraid of a little competition: he wins more often than not.ath to commercial success has its challenges.