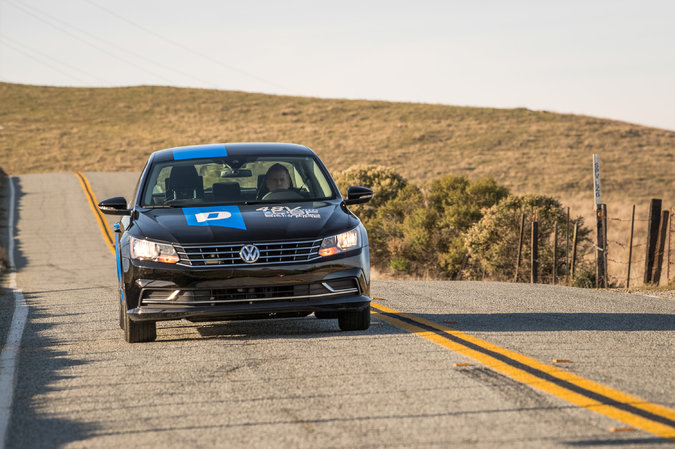 While automakers sketch out a world of sleek and silent electric cars or even self-driving pods that are more den than dragster, the all-electric future is further off than it may appear.

Car companies, starting with Volvo last summer, have laid out plans to electrify entire lineups of vehicles. But the fine print makes it clear that the coming decade and beyond will focus not just on massive battery packs powering electric motors, but also on adding a little extra juice to the venerable internal combustion engine.

Increasingly, that juice will arrive in the form of new electrical systems built to a 48-volt standard, instead of the 12-volt systems that have dominated since the 1950s. Simpler than Prius-type drivetrains and less expensive than Tesla-scale battery power, the new electrical architecture both satisfies the demands of cars made more power hungry by their gadget load and enables the use of lower-cost hybrid drive systems.

Earlier proposals to take cars to a 42-volt standard fizzled for cost reasons, but recent regulatory developments and the hardware that will one day make autonomous cars feasible have reignited the urgency.

Besides the drop in battery prices and control electronics, other factors have made 48-volt technology worth re-examining, said Jürgen Wiesenberger, director of the hybrid electrical vehicles unit at Continental North America. “The market was not ready for them in the past because of cost, but the 2013 fuel price spike changed that,” he said.

But the more integrated applications of the technology, amounting to what’s known as a mild hybrid system, offer the greatest value — up to 70 percent of the benefit of a full hybrid at 30 percent of the cost, according to industry analysts. Continental projects that 48-volt mild hybrid systems will account for 14 percent of global new vehicle sales in 2025, as sales of vehicles powered exclusively by gasoline or diesel engines drop to 65 percent.

Volvo grabbed headlines in July when it announced that it would electrify its entire model range, offering — at minimum — an electric motor to assist its piston engine in every new Volvo released from 2019. Volvo will use the 48-volt standard for its mild hybrid vehicles: those that allow the internal combustion engine to shut off while coasting or still, then kick back on when accelerating.

Audi, which is bringing 48-volt systems to the 2019 A7 and A8, replaces its conventional alternator with a larger, water-cooled alternator-starter. Rather than merely charging the battery and powering accessories, it restarts the warmed-up V6 engine after it shuts down at a stoplight and recaptures energy when slowing down to charge a lithium-ion battery in the trunk.

This design has another trick up its sleeve: It will also start the engine after the car goes into an engine-off coasting mode at speeds between 34 and 99 miles an hour, for up to 40 seconds, all in the cause of saving fuel.

Power gains are possible, too. In the SQ7, a diesel S.U.V. that Audi does not currently sell in the United States, an electric motor drives a vane-type supercharger. Similar in operation to a turbocharger, this device delivers its power boost at low engine speeds without the lag of an exhaust-driven turbo. And Mercedes-Benz is equipping the new in-line six-cylinder engine of the 2019 CLS 450 with its EQ integrated starter-generator system. In this design, the electricity is produced in the space between the engine and transmission. In motor mode, it adds 21 horse power and 184 pound-feet of torque for quick getaways, and it can take over for the gas engine at a steady-state cruise.

And 48-volt mild hybrid systems can work in heavy-duty applications: Fiat Chrysler will follow the belt-alternator approach with its eTorque system in Ram pickups and the Jeep Wrangler.

Why 48 volts? Settling on this level holds the electrical system under the 60-volt safety threshold of what is considered high voltage, where power cables must be orange and special connectors, costing 10 times as much, are required, said Mary Gustanski, chief technical officer of Delphi Technologies.

For now, the more powerful systems run alongside the traditional 12-volt electronics rather than replacing them altogether. This dual-voltage strategy avoids the need to redesign simple, reliable components like the motors that open windows and adjust seats.

“A full switch-over makes no sense,” Oliver Maiwald, a senior vice president for powertrain technology at Continental, a major industry supplier, said. “I don’t foresee a need to redesign these low-tech, low-cost parts.”

The advantages of the new 48-volt systems are considerable. They offer fuel economy improvements of up to 15 percent, Ms. Gustanski said, and would cost an automaker between $650 and $1,000 to add to the vehicle — well under the approximately $3,000 it costs to install a full hybrid system. Powering a supercharger electrically can bring a 30 percent gain in torque at low engine speeds, at an added cost of about $250.