Chargemaster is extending the rollout of its POLAR national charging network by adding 2,000 new charging points in 2018, including 400 rapid chargers. 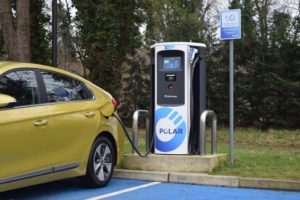 The company say this is to “match the increasing take-up of electric vehicles”.
It means in total, electric vehicle drivers on the Chargemaster network are expected to have access to over 8,500 public charging points, including 700 rapid chargers in the UK by the end of the year.

David Martell, chief executive of Chargemaster, explained that the additional charging points will help the company “maintain its position” as a market leader. He said: “Over 40,000 drivers already rely on our network, which gives them access to over 40% of all public charging points on UK-wide networks, backed up with our dedicated 24/7 customer support.”

Last month, 30 points were charged across the UK including in Canterbury, Rotherham and Swansea.

The company say it is “investing heavily” in providing charging points in key strategic locations, such as hotels, petrol stations, sports clubs and shopping centres.

Previously, it installed around 230 charging points to support a ‘growing number’ of electric and plug-in hybrid vehicles on the roads, following a £2 million contract with Nottingham city council.

At the end of 2016, Chargemaster was also awarded a £2.3 million contract to provide additional charging infrastructure under the Go Ultra Low Cities programme for Milton Keynes.