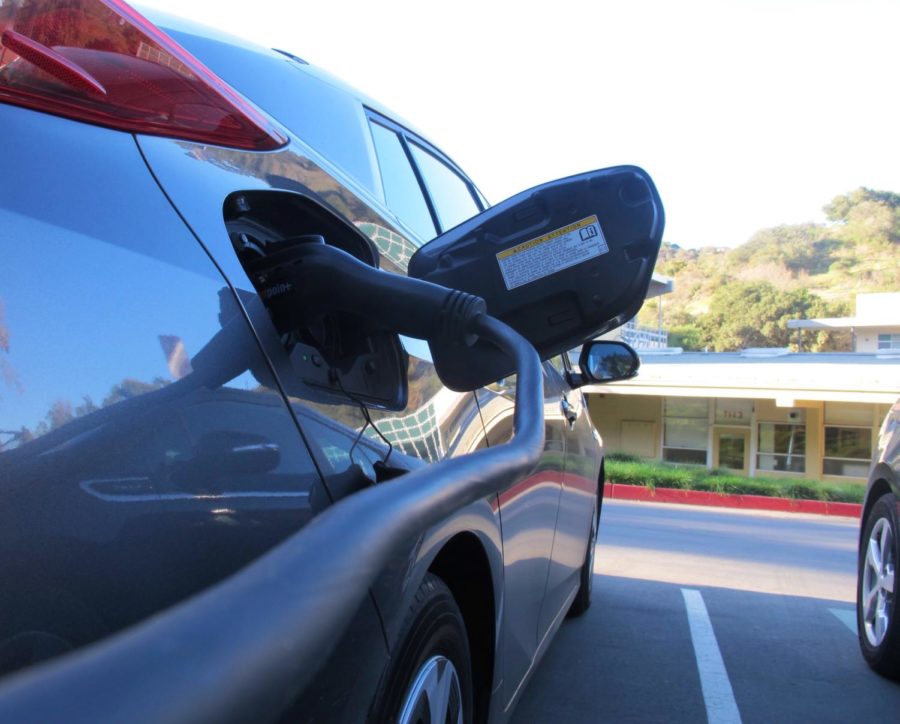 One thousand five hundred forty million metric tons of carbon dioxide was spit into the air by motor fuel burning — in 2016 alone — and for transportation only.

According to the Environmental Impact Assessment (EIA), this accounts for an estimated 30 percent of U.S. energy related carbon dioxide emissions.

However, the carbon footprint size every generation leaves behind can be lessened by the community response.
“Carlmont is teaching students to be contributing members of society and conscious about their environmental impact,” Principal Crame said.

A set of four electric charging stations (ECS) were installed at Carlmont as of Nov. 2017. Although they are just available for staff members at the moment, it holds a promising improvement to the campus.

English teacher Erik Migdail said, “I was excited because I like anything that is environmentally oriented; [the chargers] help us reduce our dependence on fossil fuels. It was specifically because I knew I could recharge at school, which really helped to drive my decision on what kind of car to buy.”

Migdail now owns a Prius Prime, and charges it at Carlmont from around 7 in the morning to just before lunch.

However, going green on campus is more difficult than what is first assumed.

“The way the pricing switches at [the time limit], it puts me into bit of a bind; I can’t really leave my classroom while it’s charging and go up there to unplug my car,” Migdail said. “Even less can I leave the spot and look for other parking which doesn’t exist. It’s a little unattentive to the realities of a teacher in a classroom and the staff.”

Teachers work class periods back to back, often arriving earlier and leaving later than students. The seven minute passing periods and hour prep do not always allow access to unplug a car.

“More chargers need to be installed and have a strict pay per use, instead of putting it on a time limit; pay for however much energy you use,” Migdail said.

However, the answer to this particular bind has answered in the form of a box of doughnuts.

Migdail asks one of his students with a class nearby the ECS to unplug his car on a daily basis. Although willing to discuss proper thanks, all the student requests for in return are two dozen sugary treats to share with her class.

Enrique Navas, the Assistant Superintendent of Administrative Services, worked in the district Maintenance and Operations Department managing the installation project at Carlmont.

“The electric charging stations were installed as an option [and] service to students, staff, and parents to support them in their efforts to reduce gas emissions,” Navas said. “There are costs associated to purchase the units, installing them, and running them; the time restriction is to make the ECS available to others.”

The ECS system works on a pay per kilowatt basis for a maximum of five hours and then switches to a pay per hour. ChargePoint’s network of charging stations track how much electricity is drawn and bills the user who had signed up through the district.

Although the sharing based time limit clashes with teachers’ schedules, the larger picture looks into bettering the environment.

Migdail said, “I’m an environmentalist, so the more people driving energy efficient electric vehicles, the better; I don’t worry too much about the price, [because] I’m saving money definitely. Overall, I appreciate the district has put in the infrastructure to help facilitate the transition to cleaner energy.”

Paired with the saved costs, the installation of the ECS further encourages the decision of whether or not a budding driver may want choose an electric car.

Maddy Li, a senior at Carlmont, owns her own electric mode of transportation.

“[Having access to a charger] could be more convenient if there are students who live farther away from campus and hope to be a little more environmentally friendly,” Li said. “In the future, electric cars will probably become more common, so places people spend time at will need charging spots, schools included.”

With hopes of expanding the electric vehicle community, the ECS friendly campus will continue to work with lessening that carbon footprint, whether it be through a pay per use or mutual box of doughnuts.