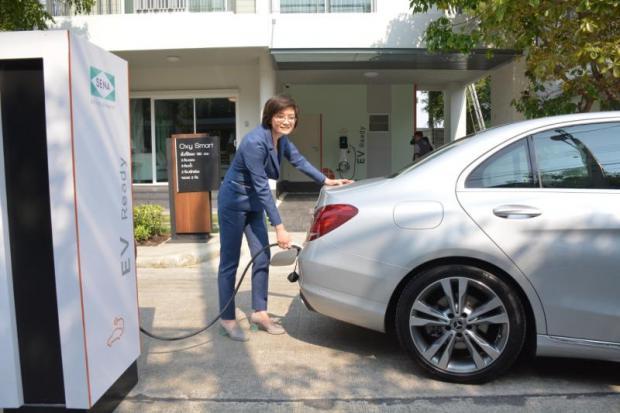 The solar rooftops have a capacity of two kilowatts. The charging stations will be located in the parking areas.

Buyers can opt to purchase higher capacities of solar rooftops, up to 8kW, at higher prices.

Ms Kessara said that while the country has limited EV vehicles such as plug-in hybrid electric vehicles (PHEVs), the company believes the trend will be adopted rapidly because every carmaker across the world is keen to produce eco-friendly cars at more competitive prices.

“Homeowners will have higher costs if they want to modify their houses for the private EV chargers,” she said.

Ms Kessara said the EVs and PHEVs are projected to attract more drivers because of lower fuel costs.

For instance, she said drivers will pay 1.05 baht per kilometre for EVs, compared with 2.50 baht for petrol cars.

Petrol retails for about 35 baht per litre, while electricity costs 4.20 baht per unit during peak hours and only 2.60 baht during off-peak hours.

Ms Kessara said Sena plans to launch new 18 housing projects by 2018, amounting to 7,300 residential units with a total value of 23 billion baht, the highest in the company’s history.

“Many economic research houses have projected that GDP will gradually revive this year,” Ms Kessara said.

SENA shares closed yesterday on the Stock Exchange of Thailand at 4.20 baht, up six satang, in trade worth 17.2 million baht.