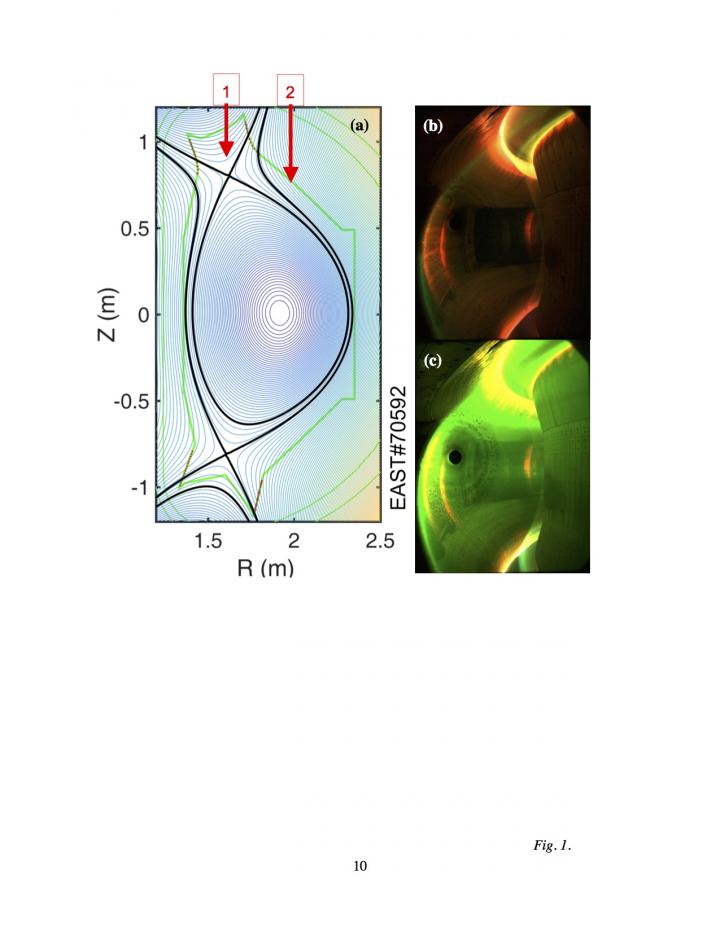 You may be most familiar with the element lithium as an integral component of your smart phone’s battery, but the element also plays a role in the development of clean fusion energy. When used on tungsten surfaces in fusion devices, lithium can reduce periodic instabilities in plasma that can damage the reactor walls, scientists have found.

The results, demonstrated by scientists at the U.S. Department of Energy’s (DOE) Princeton Plasma Physics Laboratory (PPPL) and collaborators on China’s Experimental Advanced Superconducting Tokamak (EAST) found that lithium powder can eliminate instabilities known as edge-localized modes (ELMs) when used to coat a tungsten plasma-facing component called the “divertor” — the unit that exhausts waste heat and particles from plasma that fuels fusion reactions. If left alone, such instabilities can damage the divertor and cause fusion reactions to fizzle.

The results are good news for future devices that plan to use tungsten for their own divertors that are designed to work with lithium.

Past experiments with lithium powder on EAST have confirmed the metal’s ability to eliminate or reduce the frequency and intensity of periodic bursts of ELMs that occur in the outer edge of plasmas that can damage the divertor. ELMs develop regularly when the plasma enters a high-energy state known as high-confinement mode, or H-mode, which holds heat within the plasma more efficiently. ELMs can also unleash large amounts of heat that damage the plasma-facing components and release eroded material that can enter the plasma and cool the fusion reactions.

During the past experiments, EAST’s upper and lower divertors were coated with light and porous carbon rather than the heavy metal tungsten. “So, the question was whether lithium will have the same effect on tungsten walls as it does with carbon walls,” said PPPL physicist Rajesh Maingi, lead author with Jiansheng Hu of the Institute of Plasma Physics at the Chinese Academy of Sciences (ASIPP) of a paper describing the results in the journal Nuclear Fusion.

The issue was in question because recent research on other doughnut-shaped tokamaks, such as the Axi-Symmetric Divertor Experiment-Upgrade (ASDEX-U) in Germany, have suggested that plasma-facing components made of tungsten actually reduce the ability of lithium coatings to control ELMs. Lithium was injected into ASDEX-U via large fast pellets, as compared with the lithium powder that was gravitationally injected into the EAST experiments.

In the recent experiments, researchers manipulated the plasma within EAST so that it exhausted its waste heat on the upper of the two divertors within the tokamak. Unlike the lower divertor, which was made of carbon, the upper divertor is fabricated from tungsten.

The results showed that lithium injected into plasma in contact with tungsten reduces ELMs just as much as lithium does when the plasma exhausts its heat on carbon. Physicists now have increased confidence that the techniques used to reduce ELMs in current fusion machines will be able to reduce ELMs in larger machines in the future, as long as they are designed to be compatible with lithium.

The research team noted that it became easier to eliminate ELMs as the experiments progressed, suggesting that elimination could require less lithium as time went on. Scientists would therefore like to find a way to regulate how much lithium is injected into the plasma, perhaps reducing the injection rate once the ELMs have disappeared to control the lithium inventory and optimize the performance of the plasma.