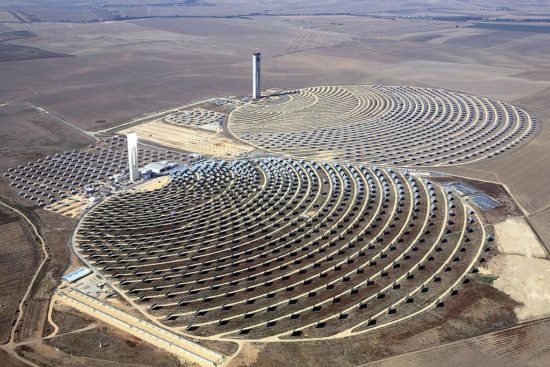 Even the cost of silver has little influence on manufacturing costs and, if necessary, silver can be replaced with more abundant metals such as copper.

While some wind turbine manufacturers with direct-drive turbines use permanent magnets containing “rare earth metals,” they don’t depend on them (and it wouldn’t be a problem if they did anyway). For example, Enercon does build direct drive turbines without using any rare earths. According to the largest wind turbine manufacturer, Vestas: The contribution of rare earth elements used in the turbine generator magnets, and also in the magnets used in the tower, make a negligible contribution to total resource depletion, contributing below 0.1% of total lifecycle impacts.

Besides, rare earth metals are neither rare, nor earths, and permanent magnets can be made without using rare earths.

Renewable energy like solar and wind power can be made from free, abundant sources: sunlight and wind. We will never run out of either, and harnessing them to make clean electricity is not that difficult today because solar power and wind power have become highly efficient and cost-competitive at producing electricity. Furthermore, these efficiencies are set to increase over time because of the hard work of researchers and renewable energy business innovators. Energy storage is also growing and this technology can be used to fill in the gaps when there is no sunlight or wind, or during periods when there is less.

Fortunately, the materials used to make solar panels and wind turbines are not of the rare kind, so manufacturing them at a scale to dominate electricity production is also very feasible. Most solar panels are silicon-based and silicon is the second most abundant element in the Earth’s crust.

Many wind turbines use permanent magnets, which require an element called neodymium, which is not any more rare than copper or nickel, even though it was named a “rare earth” metal a long time ago.

The term “rare earth,” understandably, has led some people (if not many) to assume such elements must indeed be rare. However, some of them actually are not. “So, are rare earth minerals actually rare? Not really. The term ‘rare earth’ is an archaic one, dating back to the elements’ discovery by a Swedish army lieutenant in 1787. In fact, most (though not all) of the 15 (or 16, or 17, depending on which scientist you’re talking to) elements are fairly common; several of them are more abundant in the Earth’s crust than lead or nitrogen.”

Unfortunately, some people seem to have assumed that wind turbines are less viable than they truly are because of the misunderstanding about how “rare” neodymium is — it simply isn’t rare. The situation is confusing on the face of it, but if you dig a little deeper, then you can clear it up.

There are some issues with the mining and production of this element, so some exploratory research has been conducted into the possibility of recycling it.

Oil, gas, and coal have been used for so long that we may have developed an assumption that they are reliable and very abundant. However, we all know that they can be exhausted at some point. So fossil fuels are not “scalable” for very long in the grand scheme of human society. Another thing working against them is simply how much damage they do to life on earth, including to humans. Furthermore, the difficulties and dangers that we humans encounter in extracting them suggests that they are not nearly as abundant as some would have us believe.

The fact that oil drilling takes place at deeper and deeper depths indicates the extreme efforts required to find more oil. “The blowout preventer on BP’s Macondo well failed to stop oil rushing up from the well, which was drilled 13,362 feet (4,073 meters) into the seabed. When the rig sank two days later, the pipe connecting the rig to the blowout preventer collapsed, according to a ruling last year by Federal Judge Carl Barbier. BP was declared grossly negligent, with the judge citing the company’s cost-cutting steps.“

Thirteen thousand feet is almost a trifle compared with some drilling operations, which can reach 30,000 or more. The difficulties presented by working in the oil and gas industry are perhaps underscored by the number of worker fatalities. That number was 1,189 in the United States alone, for a 10-year period. “During 2003–2013, 1,189 oil and gas extraction industry employees died while working, resulting in an average of 108 deaths per year and an annual average occupational fatality rate of 25.0 deaths per 100,000 workers.”

If oil and gas were sufficiently abundant, it would appear that extracting, processing, and transporting it would not be nearly so calamitous. (Of course, climate change impacts and air pollution effects are much worse, but that is a separate topic.)

One might say fossils fuels are abundantly damaging, and yet through repeated extraction and use, that damage seems to have become acceptable.

Similarly, allowing drilling to take place in wild habitats where threatened and/or endangered species live also suggests that oil and gas are not really all that abundant, or there would be no reason to take such ridiculous risks. “The BLM blindly decided to lease tens of thousands of acres of public land for oil and gas development, without doing any on-the-ground research. The agency hasn’t looked at the impacts of developing vast swaths of public land for oil and gas or analyzed what protections are needed to safeguard imperiled grassland species and their habitat,” explained Brad Bartlett, an attorney for Western Resource Advocates.

The amount of land remaining for wildlife is already absurdly low in some areas, so allowing oil companies to extract fossil fuels inside such land is beyond rationality. “The Trump administration auctioned off more than 50 square miles of public lands for oil drilling and fracking on Tuesday in Nevada’s Great Basin desert. The leased areas include endangered species habitat. Numerous conservation groups protested the lease sale, citing violations of environmental laws.”

It seems as though what we consider “abundant” or “scarce” is sometimes a matter of perception more than reality. When do you think we will run out of oil, gas, and coal — or lead us to a point where we basically had to stop using it because of its scarcity? “Global oil supply can’t meet global oil demand forever, necessitating new energy sources and usage practices. Even if technology allowed us to harvest every last drop of oil in the planet, increasing scarcity and rising prices would necessitate widespread change long before we actually ran out of oil.”

How ridiculous is it to blow up entire mountaintops to get coal? Somehow, this practice became acceptable, but it isn’t. “Coal companies use explosives to blast as much as 800 to 1,000 feet off the tops of mountains in order to reach thin coal seams buried deep below.”

Coal may last longer than oil, but still can be exhausted. (The US Energy Information Administration published an estimate stating the US could have well over 200 years of coal reserves remaining.) Imagine, though, how much lower the cost of renewable energy will be in just 30 years, potentially making new coal power plants in the US and other industrialized nations completely obsolete. Much is said about the potential for electric vehicles to do the same to expensive oil demand. Then, we can simply leave the remaining coal and oil reserves in the ground where they belong.