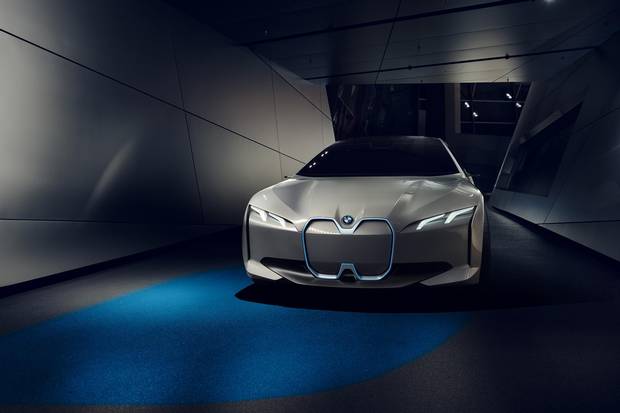 BMW unveils its electric-car plans for 2021 and beyond: a modular approach that will let the auto maker, and the driver, adapt to whatever the future might be

A new generation of synchronous electric motors, built in-house by BMW, will range from small 134 horsepower units for front-wheel-drive vehicles, to large 400 horsepower units for rear-wheel-drive models. Because these motors are so compact – not much larger than a milk crate – two or three can be packed into one car, providing all-wheel drive and over 800 hp in high-end vehicles.

BMW has committed to having 12 all-electric and 13 hybrids in its lineup by 2025.

“The fifth generation of storage and battery technology will make e-mobility attractive for longer distances,” Ian Robertson, outgoing member of BMW’s board of management, told reporters at a briefing in Munich. “Thanks to the scalable electric modular systems, from the beginning of the next decade, it will be possible to fit all model series with any drivetrain, according to demand.”

It’s a departure from BMW’s previous approach to electric vehicles, typified by the i3 EV and i8 hybrid, which were developed around costly, dedicated platforms. Since future demand for electric vehicles is hard to predict – and partly depends on government decisions about infrastructure, regulations and incentives – the modular approach means BMW can adapt to whatever demand may be.

As for the electric vehicles you can expect to see in showrooms, a fully electric Mini will arrive in 2019, followed in 2020 by an electric iX3 SUV that will be built in China. However, BMW engineers on hand said those vehicles will be based on “transitional platforms,” not on the new modular architecture.

The first example of BMW’s new platform and fifth-generation electric powertrain will be released in 2021, as an i model. Its specifications paint a picture of a serious Tesla rival, with a range of around 600 kilometres and a 0-100 km/h time of four seconds.

In a presentation, BMW engineers outlined the kind of performance and range we could expect from other models based on their fifth-gen electric powertrains.

A compact entry-level vehicle, similar to the current X1, for example, would have a 134-hp (100-kilowatt) electric motor powering the front axle, with a range of around 450 km and a 0-100 km/h time of 6.9 seconds. Customers could then specify an optional 268-hp (200-kW) electric motor on the rear axle, improving performance and adding all-wheel-drive capability.

More interesting for gearheads is the future performance-car concept BMW showed reporters. It would be powered by three electric motors, one at the front axle and two at the rear, each outputting upward of 268 hp, for a total of at least 800 hp. It could accelerate to 100 km/h in less than three seconds, and would have a range of up to 700 km. With DC fast charging, adding 100 km of range would take only 10 minutes.

The company expects an 80-per-cent increase in energy density of lithium-ion battery packs is possible, using the 2017 i3 as a baseline. Meanwhile, battery costs are expected to decrease by up to 30 per cent.

Looking beyond lithium-ion batteries, BMW announced a partnership with U.S. company Solid Power to develop solid-state batteries. They could provide up to 230 per cent the energy density of the 2017 i3’s battery.

“We have not only secured the naming rights for BMW i – from i1 to i9 – we also hold the rights for BMW X, from iX1 to iX9,” said Robertson, giving an idea of just how extensive the company’s electric lineup could be in the future.

BMW is increasing its research and development spending, he said, from 6 per cent of revenue in 2017 to between 6.5 per cent and 7 per cent in 2018.

With electric vehicles getting cheaper and the cost of fossil-fuel vehicles increasing, Robertson estimated a crossover could happen some time between 2025 and 2030. At this point, the price of an EV would presumably be on par with that of an internal-combustion vehicle.

As for what we can expect from BMW in the nearer future, 2018 will – of course – bring a barrage of new SUVs. Look for the X2 and X7 this year. “Today, about a third of BMW sales are X models,” Robertson said. “The segment is growing in all major global regions.” One day, his successor might be saying the same about electric vehicles.