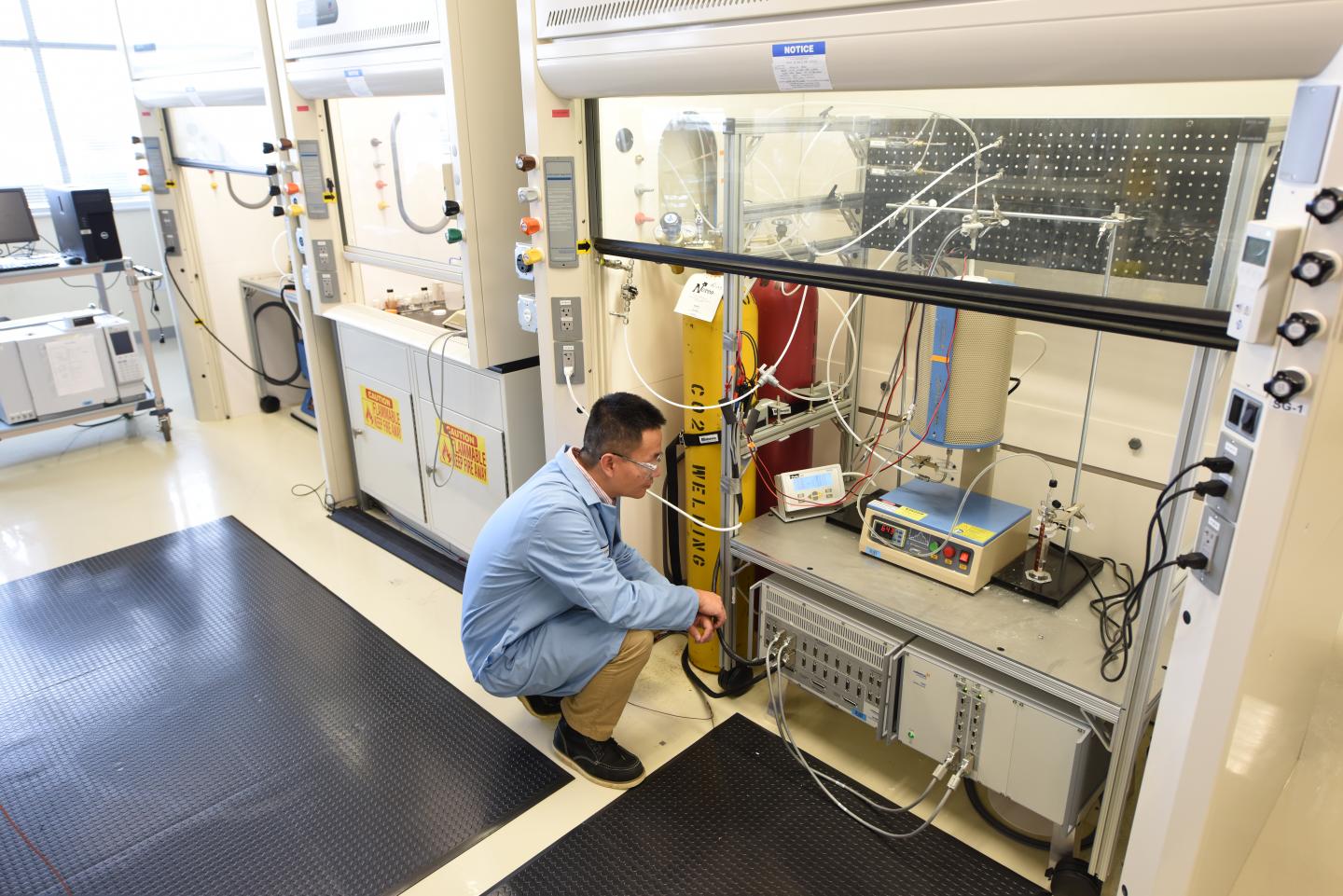 Advancements in a fuel cell technology powered by solid carbon could make electricity generation from resources such as coal and biomass cleaner and more efficient, according to a new paper published by Idaho National Laboratory researchers.

The fuel cell design incorporates innovations in three components: the anode, the electrolyte and the fuel. Together, these advancements allow the fuel cell to utilize about three times as much carbon as earlier direct carbon fuel cell (DCFC) designs.

The fuel cells also operate at lower temperatures and showed higher maximum power densities than earlier DCFCs, according to INL materials engineer Dong Ding. The results appear in this week’s edition of the journal Advanced Materials.

Whereas hydrogen fuel cells (e.g., proton exchange membrane (PEM) and other fuel cells) generate electricity from the chemical reaction between pure hydrogen and oxygen, DCFCs can use any number of carbon-based resources for fuel, including coal, coke, tar, biomass and organic waste.

Because DCFCs make use of readily available fuels, they are potentially more efficient than conventional hydrogen fuel cells. “You can skip the energy-intensive step of producing hydrogen,” Ding said.

But earlier DCFC designs have several drawbacks: They require high temperatures — 700 to 900 degrees Celsius — which makes them less efficient and less durable. Further, as a consequence of those high temperatures, they’re typically constructed of expensive materials that can handle the heat.

Ding and his colleagues addressed these challenges by designing a true direct carbon fuel cell that’s capable of operating at lower temperatures — below 600 degrees Celsius. The fuel cell makes use of solid carbon, which is finely ground and injected via an airstream into the cell. The researchers tackled the need for high temperatures by developing an electrolyte using highly conductive materials — doped cerium oxide and carbonate. These materials maintain their performance under lower temperatures.

Next, they increased carbon utilization by developing a 3-D ceramic textile anode design that interlaces bundles of fibers together like a piece of cloth. The fibers themselves are hollow and porous. All of these features combine to maximize the amount of surface area that’s available for a chemical reaction with the carbon fuel.

Finally, the researchers developed a composite fuel made from solid carbon and carbonate. “At the operating temperature, that composite is fluidlike,” Ding said. “It can easily flow into the interface.”

The molten carbonate carries the solid carbon into the hollow fibers and the pinholes of the anode, increasing the power density of the fuel cell.

The resulting fuel cell looks like a green, ceramic watch battery that’s about as thick as a piece of construction paper. A larger square is 10 centimeters on each side. The fuel cells can be stacked on top of one another depending on the application.

The technology has the potential for improved utilization of carbon fuels, such as coal and biomass, because direct carbon fuel cells produce carbon dioxide without the mixture of other gases and particulates found in smoke from coal-fired power plants, for example. This makes it easier to implement carbon capture technologies, Ding said.

The advanced DCFC design has already attracted notice from industry. Ding and his colleagues are partnering with Salt Lake City-based Storagenergy, Inc., to apply for a Department of Energy Small Business Innovation Research (SBIR)-Small Business Technology Transfer (STTR) Funding Opportunity. The results will be announced in February 2018. A Canadian energy-related company has also shown interest in these DCFC technologies.