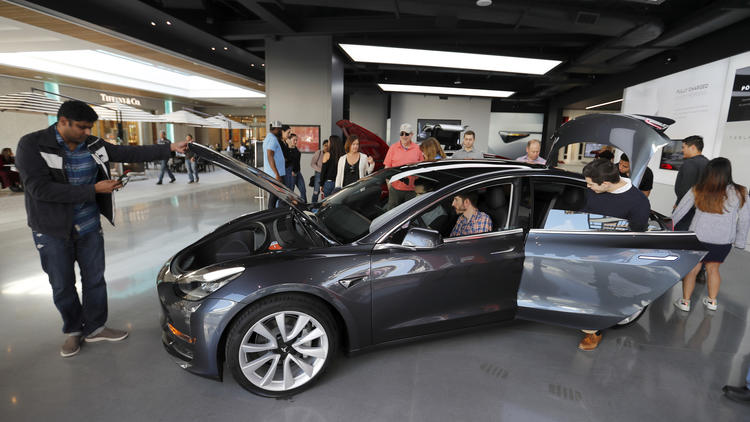 Tesla’s Model 3 is the most highly anticipated car of the 21st century. It may be the most eagerly awaited car of all time.

More than 450,000 people put down $1,000 refundable deposits to reserve one of the “affordable” battery electric sedans after Tesla Chief Executive Elon Musk unveiled the car and inaugurated the waiting list in March 2016.

Since then, online forums and automotive news websites have breathlessly reported every Musk tweet, production delay or postponed delivery date.

Now the first Model 3s are rolling away from the Fremont factory, and we were able to secure one for a long holiday weekend test drive.

The Model 3, from its inception as Tesla’s “mass-market vehicle,” promised the transportation trifecta of long range, low cost and high performance. The 3 was to be sporty, silent and quick, and emit zero pollutants, while going at least 200 miles on a charge and costing less than $35,000 before rebates and incentives.

Many people assumed it would include Tesla’s technologically sophisticated Autopilot driver assist software (it doesn’t — customers have to purchase an upgrade) and be fully rechargeable in less than an hour through Tesla’s now-nationwide “Supercharger” network (it is, but Model 3 owners won’t have free access to the network as Model S and X owners do).

Some certainly hoped they would be driving their $35,000 models 3s by now, but they can’t because the entry-level cars aren’t being built yet: Tesla is producing only the fully loaded 3s at this time. The one we drove costs $57,500.

On its actual promises, the Model 3 delivers — mostly.

The sleek midsize sedan, in its base model, is powered by a lithium-ion battery, attached to a permanent magnet motor, that will accelerate the rear-wheel-drive car from zero to 60 mph in 5.6 seconds to a top speed of 130 mph.

That battery pack is capable of running up to 220 miles between charges and can be recharged at the rate of 130 miles of range per half-hour at one of Tesla’s Supercharger stations — or at the rate of about 30 miles per hour from a 240-volt system.

(Tesla refuses to divulge the actual size of the batteries, which to my knowledge is an industry first, preferring to speak only about the user’s likely range. Published estimates put the long-range battery at about 75 kilowatt-hours, which is the size of the current entry-level Model S.)

The 3s are warrantied for four years or 50,000 miles. The standard battery comes with an eight-year, 100,000-mile warranty; the upgraded system is guaranteed for eight years and 120,000 miles.

Compared with the S and X, the 3’s acceleration rates are slow. Compared with most other $35,000 sedans, they are impressive. The four-door, five-passenger Model 3, weighing in at a reported 3,549 pounds (3,814 with the long-range battery), jets from corner to corner like a much lighter vehicle.

From a full stop around town or from cruising speed on the freeway, the sedan streaks smoothly and stealthily, gaining ground with virtually no sound or vibration. The car’s regenerative braking function allows for a lot of single pedal driving, as taking pressure off the accelerator forces the car to slow almost to a stop.

On the outside, the 3’s strong belt and hip lines echo the styling of its bigger Model S and Model X siblings. (See our reviews of the Model S P85D and Model X P100D.) The face is friendly but, like Hello Kitty, it has no mouth — needing no grille to suck in air to cool an internal combustion engine.

The roof line is an elegant arch, French-curving from the windshield to the trunk lid in one clean line. Door handles, as on the S and X, are sunk flush into the body. But unlike the S and X, there is no exterior badging, except for the now-recognizable Tesla T. Only on the rocker panels, when the doors swing open, do the words “Model 3” appear.

The inside may be the vehicle’s most dramatic feature. Textile seat covers — leather on the premium package — wrap extremely comfortable driver and passenger perches. The use of glass instead of metal and fabric for the roof material allows for excellent head room and a sense of airy openness. Three full-sized adults can fit snugly in the rear seats, which offer adequately good leg room.

The rear seats fold flat too, which creates a really roomy trunk — in addition to the front trunk “frunk” space under the hood.

The dashboard attracts considerable attention — because there isn’t one. Gone are standard dash gauges like speedometer and tachometer, along with the usual readouts for oil pressure and water temperature. Gone too are the standard dials and knobs, and the vents for heating and AC.

Instead, the dash line is one long “air blade.” All the vehicle information normally relayed through dashboard dials is contained in a single, centrally mounted, 15-inch touch-screen display.

On the left side of the screen is a section containing essential driving details. On the right are navigation and entertainment choices. Directly in front of the driver is nothing but windshield.

It is from this central touch screen that the driver adjusts audio choices or volume, selects temperature or fan speed, sets windshield wiper intervals, turns on the defroster, accepts telephone calls or chooses seat heating.

The only permanent switch inside the vehicle is the emergency flasher, apparently mandated by law. The only fixed buttons are a dial in the steering wheel that can be used to adjust the mirrors or raise and lower the audio volume, and the buttons used to operate the windows.

Some drivers will complain that the use of the touch screen requires them to take their eyes off the road, for something as simple as turning on the fog lights or opening the glove box — for which there is no switch or button.

Others will appreciate the absence of clutter and may buy Tesla’s argument that a fixed switch is forever, while a touch-screen-based system can be continually improved and updated, wirelessly, with the car never leaving the owner’s driveway.

Some pre-ordering Model 3 customers have been dismayed to discover that their base model cars won’t include Autopilot, which under certain conditions will do all the steering, braking and accelerating required for safe driving. Instead, the base model contains what Tesla calls “automatic emergency braking and collision avoidance.” Autopilot will cost an extra $5,000.

As I found when I drove the Model S and the Model X, the driver-assist Autopilot package is beyond the best in its class. Though it balked periodically — the system seemed confused by freeway interchanges — Autopilot maneuvered seamlessly across 100 miles of Los Angeles roadways without any unnecessary drama.

There is other cool technology aboard the 3 too. The voice-activated command system is top notch, as is the backup camera. The keyless ignition system allows the operator to start the car remotely and set the inside temperature or choose charging times. The nav screen will identify the closest charging stations and their charging rates.

And the Model 3’s Autopark system is very effective. As a notoriously bad parallel parker, I was delighted to see how well the 3 angled into tight spaces without any driver input.

I could quibble about the clunkiness of the suspension damping, which seemed to amplify the impact of certain potholes, and about the squeaky front left body panel — things that would not be noticeable on a gas-powered car but stood out in the silence of the electric 3, and would drive me nuts if I’d paid top price for the car and then waited so long to get it.

Over three days of driving, while I was enjoying the acceleration and silent sporty feel of the 3, I didn’t do a very good job of maximizing range. Though the unit I drove was fitted with the $9,000 “long-range battery” upgrade — as well as other upgrades for the enhanced Autopilot, premium interior, special wheels and special paint — I found I had only 52% of battery power remaining after I’d driven my first 100 miles, suggesting that my total distance between recharges would be closer to 220 miles than the promised 310, unless I began driving more conservatively.

That should be easy on the Model 3. Unlike the Models S and X, there are no driving modes on this mass-market car. There’s no “chill” mode, for relaxed, range-extending driving, and there’s no “insane” or “ludicrous” mode, for maximum acceleration.

Will owners like their cars? That may depend on which 3 they’ve ordered. I drove the top-of-the-line version but wasn’t able to test or even see one of the base models. So it’s difficult to know just how stripped-down a stripped-down model would feel.

It also may depend, after the long wait and resulting high expectations, on what drivers think they’re buying. If they’ve driven an S or X and are expecting the same build quality and performance, they may be disappointed. If they’ve never driven an electric car, they’ll be blown away.

Times’ take: The most eagerly awaited car in history delivers

Battery range: 220 miles on base model, 310 miles on long-range model