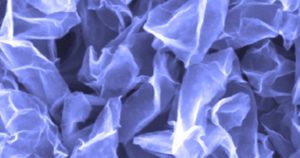 Lithium metal-based batteries have the potential to revolutionize the battery sector. With the theoretically ultra-high capacity of lithium metal used by itself, this new type of battery can be employed to power everything from personal gadgets to cars.

“In current batteries, lithium is usually atomically distributed in another material such as graphite or silicon in the anode,” explains Northwestern Engineering’s Jiaxing Huang. “But using an additional material ‘dilutes’ the battery’s performance. Lithium is already a metal, so why not use lithium by itself?”

The answer is a research challenge that scientists have spent years attempting to overcome. As lithium gets charged and discharged in a battery, it begins to grow dendrites and filaments, “which causes a number of problems,” Huang said. “At best, it leads to rapid degradation of the battery’s performance. At worst, it causes the battery to short or even catch fire.”

One existing solution to avoid lithium’s destructive dendrites is to employ a porous scaffold, such as those made from carbon materials, on which lithium preferentially deposits. Then during battery charging, lithium can deposit along the surface of the scaffold, bypassing dendrite growth. This, however, introduces a new issue. As lithium deposits onto and then dissolves from the porous support as the battery cycles, its volume wavers significantly. This volume fluctuation causes stress that could break the porous support.

Huang and his collaborators have deciphered this problem by choosing a different approach — one that even makes batteries lighter weight and able to contain more lithium.

The answer lies in a scaffold composed of crumpled graphene balls, which can stack with ease to form a porous scaffold, because of their paper ball-like shape. They not only prevent dendrite growth but can also survive the stress from the wavering volume of lithium. The research was featured on the cover of the January edition of the journal Joule.

“One general philosophy for making something that can maintain high stress is to make it so strong that it’s unbreakable,” said Huang, professor of materials science and engineering in Northwestern’s McCormick School of Engineering. “Our strategy is based on an opposite idea. Instead of trying to make it unbreakable, our scaffold is made of loosely stacked particles that can readily restack.”

In Huang’s team’s battery, the crumpled graphene scaffold houses the fluctuation of lithium as it cycles between the cathode and anode. The crumpled balls can travel apart when lithium deposits and then freely assemble back together when the lithium is depleted. Since minute paper balls are conductive and allow lithium ions to flow quickly along their surface, the scaffold forms a continuously conductive, porous, dynamic network for lithium.

Formerly advised by Huang, Luo received his PhD in materials science and engineering in 2013. Currently as a professor and researcher at Tianjin University, Luo continues to partner with Huang.

In contrast to batteries that use graphite as the host material in the anode, Huang’s solution is a lot lighter in weight and can stabilize a higher load of lithium during cycling. While typical batteries encapsulate lithium that measures only tens of microns in thickness, Huang’s battery holds lithium stacked 150 µm high.

Huang and his collaborators have filed a provisional patent via Northwestern’s Innovation and New Ventures Office (INVO).