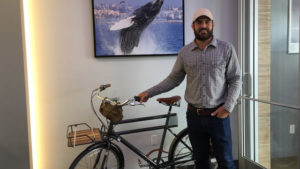 After a brutal horseback riding accident, Joseph Marino Jr. felt like his freedom was gone. His days of giving horseback tours seemed over.

Following his third and final surgery in the spring of 2016 — a year after the incident — Marino knew he had to change something in his life.

“I used to whip around corners on horseback with the wind in my face,” said 27-year-old Marino, who lives in Torrance, California. “It hurt not to have that anymore; not to feel myself riding anything.”

With horses out of the question, Marino opted for an electric bicycle. He sold his truck, and began riding a Faraday ebike to work and school.

He is among the growing number of U.S. riders who are gravitating to electric bikes for convenience, health benefits and their fun factor. Although ebikes first appeared in the 90s, cheaper options and a longer-lasting batteries are breathing new life into the concept.

“You honestly feel like you’re floating,” said Marino, who found pedaling easy for his recovering leg. “I felt like I was riding horses again. Instead of trails, I was road biking in and out of traffic.”

To ride an ebike, a user pedals or triggers the throttle for the battery-powered electric motor, providing power to the wheels. Some ebikes can go as fast as 28 mph. The speed is dependent on how hard someone pedals or pulls the throttle.

Marino said his legs are now stronger than before his injury due to riding more than 4,000 miles on his ebike. He plans to return to work on horseback this summer.

Established bike companies and startups are embracing ebikes to meet demand. About 34 million ebikes were sold worldwide in 2017, according to data from eCycleElectric Consultants. Most were sold in Europe and China, where the bikes already have exploded in popularity. In 2017, the U.S. market grew to 263,000 bikes, a 25 percent gain from the prior year.

The industry is benefiting from improved batteries as suppliers over the years developed technology for laptops, smartphones and electric cars. In 2004, lithium ion battery prices fell low enough to be used on electric bikes, spurring European sales, according to Edward Benjamin, senior managing director at eCycleElectric Consulting.

But lower cost options are emerging, too. This month, three U.S. bikeshare companies, Motivate, LimeBike and Spin, announced electric bicycles will be added to their fleets. New York-based Jump Bicycles is already operating an electric bikeshare in Washington, D.C., and is launching in San Francisco soon. Rides cost $2 for 30 minutes.

The system works like existing dockless bikeshare systems, where riders unlock bikes through a smartphone app.

“This is the beginning of a multi-year shift away from regular pedal to electric bikes,” Jump Bikes CEO Ryan Rzepecki told CNN Tech. “When people first jump on an ebike, their face lights up. It’s exciting and joyful in a way that you don’t get from a regular bike.”

Two years ago, CEO Chris Cocalis of Pivot Cycles — which sells high-end mountain bikes — found that U.S. bike shops weren’t interested in stocking ebikes. Some retailers warned Cocalis that they’d drop the brand if it came out with an electric bike. Some traditionalists had feared excess wear on trails, but research has since shown that not to be the case.

Now that sales are taking off, the vast majority of bike dealers are asking Cocalis when he’ll make an ebike available. Meanwhile, Pivot Cycles sells an ebike in Europe now, and has its eye on the U.S. market.

“There’s tremendous opportunity to get a generation of people for whom suffering isn’t their thing,” Cocalis said. “Ebike riders get the enjoyable part of cycling without the massive suffering of climbing huge hills.”