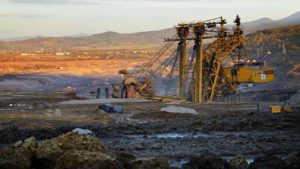 This year, the international mining industry experienced growth in key commodities, including coal, copper and iron ore, with slight increases in prices, as well as a plethora of mergers, acquisitions and investments. But there have been many challenges to overcome too, in the form of greater opposition to new projects and stronger pressures to meet the requirements of ever-tightening transparency laws. Nevertheless, the sector has gained some stability, reduced its costs and is once again rehiring; but can it expect this growth to continue, and where might be the bumps in the road ahead?

After several years of low prices, coal has experienced a strong 12 months, but will it continue? James Stevenson, senior director, global coal at IHS Markit, says coal mining is still growing, globally, but some markets are faring far better than others.

“Regionally, we expect coal mining in the US and Europe to fall, but there is still a lot of growth in coal demand in Asia and India, and that is expected to grow,” he says.

US President Donald Trump’s attempts to revive America’s coal industry by cutting regulation has had the effect of slowing the sector’s decline regionally, but it is still not enough to sustain it in the long term.

“US coal demand has taken a hit from regulation, primarily in the form of extra cost on coal power plants, where companies have decided it’s better to retire – that is pretty much baked in,” says Stevenson. “It is still cheaper to build a gas plant than a coal one, and that will drive coal demand down.”

Stevenson does, however, expect very slow growth in US coal exports over time, though this will be modest compared to the rate of decline, overall, creating a net effect of less production.

Elsewhere, along with Asia, Australia is expected to see export growth next year and to meet future demand it must invest now, says Stevenson, which could be problematic due to increasing opposition to new coal mining projects in the country. But Australia has a geographical advantage of the US, allowing it to better serve growing demand in the Asian coal market.

“Investments need to be made and this should be supported by better prices,” Stevenson adds. “There is a risk, however, that production doesn’t get online as quickly as it is needed, resulting in high prices.

“Environmental opposition may have an impact on production growth in Australia and may require someone else to export, which increases the likelihood of stronger prices.”

Beyond 2018, IHS Markit is concerned that, in the long term, there will not be enough projects to meet global coal demand in the early 2020s.

This is a problem that could be exacerbated by mining majors such as Rio Tinto getting rid of coal assets because they are less competitive than others.

According to the EY Top 10 Business Risks Facing Mining and Metals 2017-2018 report, digital effectiveness will be the number one risk for the mining and metals industry next year.

“The opportunity through digital is huge,” says Paul Mitchell, EY global mining and metals advisory leader. “But digital goes beyond just adopting new technologies: it is a critical enabler to address the sector’s most urgent operational challenge – improving productivity across the value chain.”

While many companies are some way into their digital journeys, poor implementation of technology and a gap between progress and scale of the opportunity leaves companies at risk of falling behind leading adopters.

Furthermore, despite the unprecedented rise in cyberattacks it encounters year-on-year, the report indicates that the mining industry is yet to catch-up on cybersecurity awareness.

“As the sector increasingly moves toward digital transformation, the attack surface is becoming larger and it is critical that mining and metals companies accelerate their cybersecurity programme,” adds Mitchell.

Cyber risk has risen from ninth to third position, demonstrating both the level of threat and urgency of response.

Along with digital transformation, EY highlights regulatory risk as a new entrant to its top ten business risks, as governments demand a greater return from their natural resources due to improving commodity prices and profits, while transparency initiatives continue to gain momentum.

Mitchell says: “A change in the regulatory framework can cause significant uncertainty to companies and possibly impact foreign investment. It is therefore critical that [mining companies] keep abreast of proposed regulatory changes and maintain open and transparent communications to all levels of government and their regulatory agencies.”

Other top risks, according to EY, include competitive shareholder returns, future demand dynamics being disrupted by renewables and clean energy, and access to and optimisation of energy.

Trump’s plans to spend $1tn-$2tn on infrastructure is likely to be boost for steel and aggregate markets, according to analysts, but only marginally.

Key markets for steel in 2018 include India, Brazil and Russia, as they move out of recession, but China, which accounts for 45% of global steel demand, is expected to return to a more subdued growth rate after its recent, short uplift. For this reason, overall growth momentum will remain modest.

The anticipated exponential growth in the electric vehicles market moving forward will keep the lithium sector strong. Bloomberg New Energy Finance projects that electric vehicles will make up more than half of new sales globally by 2040. Prices for lithium carbonate, used in the cathodes of batteries, have more than doubled since 2015, according to consultancy CRU.

Yet, there have been mixed expectations as to whether supply will slightly outstrip demand next year. CRU had said that lithium supply was expected to outweigh demand as early as next year, yet others are concerned that the opposite will happen.

“It took many years for [iron ore] supply to catch up with demand – this will be the case in battery materials if capital is not available to develop new projects,” Reg Spencer, an analyst at Canaccord Genuity told the Financial Times. The consultancy forecasts that $3bn of investment is needed to extract more lithium from the deserts of South America and hard rock in Australia.

More than half of the estimated resources of lithium are in South America, therefore the region is expected to see the biggest growth in investment. But projects are popping up all over the world, from the Congo to the UK.

Another sector expected to see continued growth in 2018 is copper, producers of which, after struggling with falling copper prices since 2011, are finally recording profits and, according to analysts at S&P Global Market Intelligence, profits are set to grow further in 2018.

All of this is having a positive effect on Canada’s junior miner sector, one of the biggest in the world. A new report by PwC says the juniors are showing signs of a “delicate recovery” after years of struggling following a drop in commodity prices.

Developing nations: ones to watch

The mining sector is always looking to new frontiers for exploration and growth; but often, new projects are found in developing nations with changeable regulations and expectations, which can be a challenge. Considering this, what should miners look out for in 2018?

Mongolia is anticipated to be a mining hotspot in the coming years. The country is set to lease 21% of its land for exploration. Furthermore, in May, the Mongolian Government annulled a controversial banking law which would have required companies such as Rio Tinto to funnel all sales revenues from foreign investment projects through Mongolian banks. This move will greatly help Rio Tinto’s giant Oyu Tolgoi copper-gold mine get off the ground after several delays and no doubt boost investor interest in the region.

Conversely, ongoing uncertainty faces miners in the Philippines. In September, President Rodrigo Duterte said he agreed with banning open-pit mining here, the world’s top nickel ore exporting country, given the environmental damage it causes, but that he would give mining firms time to find other methods of excavation. The following month, the country’s environment minister said he was hopeful the ban would be lifted after a government panel recommended its removal. Lifting the ban would allow the development of some big mining projects, including the $5.9bn Tampakan copper-gold mine, presenting an enormous incentive.

While in Africa, formerly considered one of the continent’s brightest mining prospects, investment in Tanzania’s mining industry has slowed due to a crackdown on firms by the government as it attempts to reap greater benefits from the sector. Barrick Gold, for instance, will give Tanzania a 16% stake in three gold mines, a 50% share in revenues from the mines and a one-off payment of $300m to resolve a dispute that has hit its operations in the country. Consequently, share prices of many firms listed in Australia, the UK, South Africa and Canada with interests in Tanzania have halved, as the value of their investments has tumbled.