No doubt about it—the world is getting smarter. Widely available wireless connectivity, low-cost  sensors, and low-power embedded microcontrollers have spawned numerous “smart” consumer products, including phones, watches, and credit cards. Behind the scenes, we’re seeing the rise of the smart factory and the smart grid, and researchers are even working on smart dust.

The smart home is part of a wider trend—the Internet of Things (IoT)—that’s bringing big changes to the factory floor, the operating room, and down on the farm.  The smart home adds wireless connectivity to a host of formerly “dumb” devices and networks them together to achieve greater energy efficiency, security, and convenience. Figure 1 shows a typical smart-home installation with multiple remote peripheral devices linked to a central gateway (controller) via a wireless LAN or home area network (HAN). 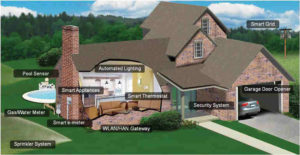 Connecting many devices opens up a host of intriguing possibilities, but providing power to such a disparate collection of products poses problems for the system designer, particularly in a home that wasn’t designed to accommodate a “smart” installation.

Some power solutions are relatively obvious. Most smart-home systems rely on a control panel, hub, or base unit in a fixed location that can be located next to an ac outlet. However, the system may also include distributed or mobile wireless sensors, video doorbells, security cameras, or similar peripherals that can’t be conveniently located near a permanent power source, especially in homes built before the IoT revolution.

There are two basic classes of home-automation applications for batteries:

Those looking to reduce maintenance and replacement costs are turning more to rechargeable lithium-ion (Li-ion) batteries for both types of applications. Suppliers of power integrated circuits (ICs) have developed a wide range of power-management and charging solutions for battery-powered devices. If you’re developing a smart-home system, it makes sense to take advantage of these ready-made options and free up more time to concentrate on system functionality.

In the fast-moving home-automation market, using an off-the-shelf solution can also shorten time-to-market and boost the product’s chances of success.

The Care and Feeding of Li-ion Batteries

The key functions of a battery-management system include managing the charging cycle to minimize the charging time without stressing the battery and reducing its useful life; monitoring the current state of the battery; detecting and reporting fault conditions; and taking appropriate action. Let’s quickly review the first two functions:

Charging: Li-ion batteries have a small safe operating window during both charging and discharging. The standard charging profile (Fig. 2) includes a constant-current (CC) phase followed by a constant-voltage (CV) phase.

2. A prime role of a battery charger is to manage to the charging cycle. (Source: )

Battery monitoring: Battery-management devices include sophisticated algorithms to monitor and measure the condition of the battery. The amount of energy in the battery is expressed as its state of charge (SoC). This is usually stated as a percentage, from 0% (fully discharged) to 100% (fully charged).  One common algorithm, coulomb counting, estimates the available charge by beginning with a baseline value, then adjusting that value over time as current flows into and out of the battery. The baseline value is reset periodically by measuring the open-circuit voltage (OCV) under a set of tightly specified no-load conditions and deriving the new value from a battery-characterization table.

All batteries slowly degrade over their lifetime based on their operating patterns, environmental conditions, and internal processes. This degradation occurs under all load conditions, and even while in storage.

A battery’s state of health (SoH), expressed as a percentage, is another widely-used metric. SoH indicates a battery’s current performance relative to that of a new part. For example, a battery’s effective capacity may have degraded to 850 mAh after two years compared to 1000 mAh when new—meaning its SoH is 85%. While there are multiple variations, many battery chemistries degrade rapidly once their SoH falls below 70-75%. As a result, once a battery is at 80%, it’s usually time to replace it if the application is safety- or security-critical.

Choosing a Charger for a Primary Battery Application

For a pure battery-powered application, long battery life is essential. The charger must follow the standard charging profile, of course, but precise control of the voltage during the CV phase is critical to longevity. A small difference in charging voltage can make a huge difference.

For example, a battery with a nominal cell voltage of 4.1 V can be overcharged to give a higher initial capacity, but over multiple charging cycles, the degradation is much more severe (Fig. 3). Compare the curves for a 4.25-V versus 4.2-V charging voltage: After 500 charging cycles, a 50-mV difference results in a 50% capacity reduction!

3. The useful life of a battery depends heavily on the CV stage of the charging cycle. (Source: )

Use a Linear Charger for Low-Power Applications

For small batteries and low charge currents, a linear charger is a good choice—it’s cost-effective and easy to implement. The linear topology uses a pass transistor to step down the adapter voltage. This transistor wastes excess power by dissipating it as heat, but that’s not an issue for a low-power application.

4. The bq25120A is a highly integrated power-management solution for low-power applications. (Source: )

The battery charger follows the standard Li-ion charge profile. An input is provided for a voltage-based battery-pack thermistor. Internal circuitry monitors the battery temperature and automatically changes the charge parameters to keep the battery within its safe temperature range. This circuit is compatible with the established by the Japan Electronics and Information Technology Industries Association (JEITA).

USB is the most popular serial interface, and residential ac outlets are starting to integrate USB charging capability. The bq25120 is optimized for 5-V USB-derived input power, but can withstand line transients up to 20 V.

A linear charger is a great option for low-power applications. However, a home-automation peripheral such as a high-resolution camera may need a larger battery to increase run times, and such a battery requires a higher-power charger to maintain a short charging time.

High efficiency assumes greater importance as power levels increase. Thus, higher-power chargers are usually switched-mode designs. A switcher can achieve efficiencies well over 90%, but it’s considerably more complicated to design and lay out than its linear counterpart. The flexibility to handle multiple battery chemistries, charging schemes, and configurations is another highly desirable feature. A discrete design, though, usually requires adding a microcontroller with a corresponding increase in complexity. Higher-current switch-mode chargers may also require external power FETs or current-sensing components.

In this area, too, products are available that help integrate functions and simplify the design. The is a standalone switch-mode battery-management device that can supply up to 3 A to charge a single-cell Li-ion or Li-polymer battery. The device includes power-path management circuitry that automatically connects the battery to the system if the input power source is removed. The low-impedance power path optimizes switch-mode operation efficiency, reduces battery-charging time, and extends battery life.

5. The bq25606 features high-efficiency operation with internal power FETs, and allows the designer to set parameters with a few external resistors.

The circuit in Figure 5 provides all of the functionality for a typical single-cell charging and system power solution. It also has built-in overvoltage protection to guard against power-line or connection transients.

The bq25606 also integrates the bootstrap diode for the high-side gate drive to simplify system design.

An ac-powered home-automation application with a backup battery imposes the same requirements on the battery charger as before. However, one more complication arises, since the battery may sit idle for years before being called into service.

During this time, the battery management is connected, but the battery isn’t sourcing any current. In such a “rarely discharged” application, the standard metrics discussed earlier aren’t useful in evaluating the battery’s ability to supply a sudden load current after years of inactivity. The battery can read 100% charge for months or even years according to the standard SoC measurement. The internal impedance does increase over time, but that’s not apparent without measuring current through a load. Furthermore, many rechargeable chemistries show very little change in OCV until the battery’s SoH is well below the replacement point.

The traditional method of making an end-of-service (EOS) determination for a battery is to perform a maintenance cycle: Take the battery offline, discharge a large portion of its capacity (over 90% in some cases), and measure the resulting voltage. If the battery fails, it’s replaced, but of course the battery is unavailable for emergency use during this time.

6. Unlike a standard approach (left), the EOS algorithm in the bq34110 (right) lets the battery remain online during the learning phase. (Source: )

The challenge for designers is how to detect aging without compromising the battery’s availability. Texas Instruments has developed an EOS algorithm that enables an evaluation of the battery status using “learning phases.” The learning phases (Fig. 6) allow the battery to remain in service. They only require a 1-2% discharge to evaluate the health of the battery and estimate if it’s nearing the end of its usable life. Over the multiyear operating life of a backup battery, the EOS algorithm need only run approximately once a month to give sufficient data.

This EOS algorithm is integrated into several battery gas-gauge devices. The , for example, provides EOS determination for single- and multi-cell batteries up to 65 V. The part supports multiple battery chemistries, including Li-ion and LiFePO4, nickel metal hydride (NiMH), nickel cadmium (NiCd), and even lead-acid (PbA).

The EOS determination function provides an alert when battery capability has degraded and is nearing the end of its useful life. This algorithm can run automatically using an internal timer, or in response to a command from a host microcontroller via its I2C interface. You can find more detail on CEDV and EOS implementations with the bq34110 in this .