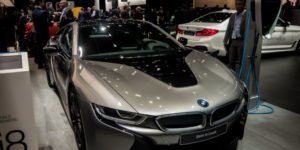 At this year’s North American International Auto Show, BMW revealed the mid-life refresh for this clever machine. The engineers at BMW i have shown restraint, though. According to Alexander Kotouc, head of BMW i product management, that’s in large part due to feedback from customers.

“When we asked customers what we could improve, they said ‘not too much,'” he told me. “We didn’t change the styling because it still looks modern. But we did a lot inside the car.”

Primarily, that means further optimization of the hybrid powertrain. The most notable change is the car’s battery pack; out goes the old 7.1kWh pack, replaced by new 34Ah cells, to give the revised i8 a total of 11.6kWh.

“We were able to do that without adding too much weight,” Kotouc explained. “Now you have something close to 50km of electric range.” For Kotouc, this has meant his daily commute is now purely electric. (We should note that BMW North America’s press materials quote the pure electric range of the i8 at 18 miles.)

The other significant change under the hood is a tweaked electric motor/generator unit that powers the front wheels; this now provides 143hp/106kW (compared to 131hp/98kW). With a combined 369hp (275kW), that makes this a rather quick car—0 to 62mph in 4.2 seconds—although one of my abiding memories of the 2015 model was the way it always felt like it had 200hp more.
That extra juice is thanks to the way the electric motor and three-cylinder internal combustion engine work together. “That’s a big selling proposition for the i8; you don’t feel the two engines,” he said. “The seamlessness is perfect. We’ve improved the powertrain but kept the way the electric motor and engine interact the same.”

The other notable change is to the i8’s sound. “It’s a little bit more evil,” Kotouc explained, thanks to changes in the exhaust. Still, a louder exhaust doesn’t mean waking up the neighbors—one of the i8’s cool party tricks is being able to drive off purely under battery power.

But don’t expect the inline three-cylinder engine to be swapped out for something bigger. “The question I’m always being asked is when you’ll bring a ‘proper’ engine to the car,” he told me. “I always tell people that’s not the idea of the i8. It’s a super sports car with the consumption of a microcar. It fits the DNA of the car perfectly.”

While the i8 has always been an extrovert’s car—you can’t park anywhere without spending 10 minutes talking about it to inquisitive onlookers, particularly when they see the dihedral doors—there’s also a convertible i8 Roadster, first seen at last year’s LA Auto Show.