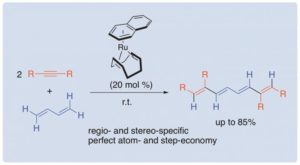 Conjugated tetraenes are important key substructures in electronic materials, natural products and pharmaceutical molecules. However, they are difficult to synthesize. They are conventionally prepared by repetitions of the stoichiometric reactions using phosphorus reagents and subsequent reduction and partial oxidation. For making one C=C double bond, one needs to conduct 3 step reactions by this procedure. Each process produces wastes of phosphorus oxides and metal compounds such as lithium, aluminum and manganese. Removal of organic solvents and purification processes are also required. An alternative catalytic approach is the cross-coupling reaction catalyzed by a Pd complex but this method needs to prepare an activated alkenyl or dienyl metal species in advance.

TUAT researchers have achieved the new synthetic route of conjugated tetraenes from inexpensive and easily available 1,3-butadiene and substituted acetylenes by a one-pot approach under mild conditions. This is the most straightforward synthetic method ever reported. This new method has been published in the ACS journal, Organometallics.

“The Ru catalyst precisely distinguishes butadiene and substituted acetylene molecules and new carbon-carbon bonds are formed among a butadiene with two acetylenes just by migration of the terminal hydrogen atoms in butadiene. Interestingly, this catalysis proceeds regio- and stereoselectively and no wastes are produced from the reaction” said Masafumi Hirano, a TUAT professor of chemistry and principal of the study.

The current scope is, however, limited to internal alkynes (1,2-disubstituted acetylenes), and the present reaction entails internal side groups in the conjugated tetraenes. However, facile detachment of some side groups is possible to give the linear conjugated polyenes and this protocol will be disclosed in the 98th annual meeting of the Chemical Society of Japan.

Instead of 1,3-butadiene, 1-substituted 1,3-butadienes such as 1,3-pentadiene or 2,4-pentadienoate are also possible to use for the reaction but conjugated trienes are produced in this case.

The mechanism is revealed by the isotopic labeling experiments and the stoichiometric reactions by use the 1,3-butadiene complex of ruthenium. These studies demonstrate this reaction to be a formal syn addition of the terminal C-H bond in butadiene to acetyelene.

Conjugated tetraenes are important key substructures in organic-electronic materials, biologically active natural products such as vitamins, and anti-mycotic drugs and this new method may contribute to the preparations of them. “The ultimate goal is versatile synthesis of targeted conjugated polyene molecules and to supply conjugated polyene substructures by this inexpensive method”, said Masafumi. That could lead to facile and inexpensive synthesis of molecules for electronic materials and anti-mycotic drugs.