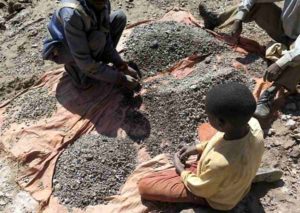 The cobalt market will record a supply surplus both this year and next, according to heavyweight commodities research house CRU.

This might seem a little surprising, given all the bullish hype surrounding a metal that more than doubled in price last year.

CRU itself has drastically revised its original assessment of a sustained supply shortfall due to strong demand growth from the battery sector.

What has changed its mind?

In short, it’s the return of the Katanga mine after two years of suspended activities. Once fully operational, Katanga will be the “largest cobalt-producing mining project in the world”. (CRU Insight, Jan. 4 2018)

Bulls needn’t panic just yet, however. CRU doesn’t expect much of a price reaction.

Rather, “big future consumers of cobalt like automotive companies, tech companies and battery manufacturers will choose to invest and stockpile” material to try and mitigate future supply risk.

Because the return of Katanga simply increases the dependence of the whole cobalt supply chain on just one highly problematic country, the Democratic Republic of Congo (DRC).

DOUBLING DOWN ON THE DRC

The Katanga copper mine has been out of action since the end of 2015 for a major refurbishment.

It is now returning with a super-charged cobalt circuit and, according to owner Glencore, should produce 11,000 tonnes of the battery material this year, rising to 34,000 tonnes next year.

To put those figures into context, consider the fact that the United States Geological Survey (USGS) estimates global mined cobalt production was just 123,000 tonnes in 2016.

It’s only fair to point out that CRU is a little skeptical of Glencore’s ability to hit its production guidance, citing power stability and sulphuric acid availability.

But even if Katanga underperforms, the boost to global supply will still be enough to tilt the whole market into surplus.

It will also lift further the ratio of global production coming from the DRC. It was, according to the USGS, already over 50 percent in 2016.

And it’s difficult to think of a more unstable production base for a metal that will play a critical role in the batteries that will fuel the electric vehicle revolution.

The DRC poses a unique combination of political, financial, operational and ethical risks.

But for the foreseeable future cobalt is going to struggle to free itself of its Congo dependency.

Cobalt is rarely found on its own but rather exists as a by-product in copper or nickel deposits.

The largest concentration of copper-cobalt deposits is in the Central African Copperbelt running from Zambia into the DRC.

Not only is there a lot of cobalt there, around half of the world’s current reserves, but centuries of copper mining have left significant resources in easily exploited old mine tailings and workings.

Which is one reason there is a lot of artisanal mining in the DRC, another source of concern for a supply chain that is all about a “clean” and green future.

The other two main types of cobalt-containing deposits are both nickel.

The most well-known nickel-cobalt sulfide deposits are those in Canada’s Sudbury Basin, currently operated by Glencore and Vale, and those in Russia’s Far North operated by Norilsk Nickel.

Nickel-cobalt laterite deposits, by contrast, are typically located in “humid tropical climates”, according to the USGS, and classic examples are Western Australian nickel mines and the Goro mine in New Caledonia.

THE PROBLEM WITH NICKEL

If cobalt is going to reduce its dependency on the DRC, it will need a lot more investment in these sorts of nickel deposits.

The problem is that nickel is still suffering from a production surge occasioned by a price spike to over $50,000 per tonne a decade ago.

In London the nickel price has been languishing either side of the $10,000 level for the last two years.

The market is absorbing the wave of new projects that were planned in the mid-2000s. Mines such as Goro have been plagued by technical problems and are running years behind schedule, only now getting close to nameplate capacity.

Still processing the last supply surge, few in the nickel market have been investing in new supply.

And without new nickel mines, there are not going to be a lot of new cobalt mines either.

The irony is that nickel itself is expected to be a future beneficiary of the electric vehicle revolution. But right now its fortunes are still tied to the stainless steel sector and its price is still depressed by high global inventories.

The surging cobalt price and the realization that there is no easy way to eliminate the stuff from lithium-ion batteries has triggered something of a global scramble for new sources of supply, particularly “clean” supply that isn’t tainted with insurgency groups and child labor.

There are a clutch of projects in North America and Australia that could realistically come into production in the space of a couple of years.

But they are small relative to Katanga and will not significantly alter the DRC’s core position within the cobalt supply chain.

Either the world has to find a lot more stand-alone cobalt deposits or it’s going to need a much higher nickel price to kick-start the investment cycle in new nickel-cobalt mines.

Until then, the DRC will be the world’s dominant supplier, leaving both battery and EV sectors relying on one of the world’s least reliable countries.