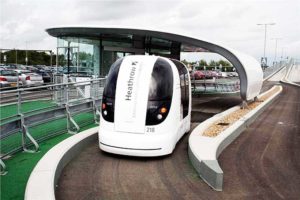 Worldwide, there were nearly one billion passenger vehicles and 335 million commercial vehicles on the road in 2015. This number has been rising steadily over the past few decades, fueled by rising economic growth around the world. In China alone, more than 21 million passenger cars were sold in 2015, up from only 6 million in 2008.

Today, as part of the Eighth Session of the Assembly, IRENA held a high-level Ministerial Roundtable to explore the links between an increasingly electrified transport sector and accelerated renewable energy deployment, with a view to scaling up the use of renewables in e-mobility.

Members were clear about the importance of a platform like IRENA to the endeavor. As H.E. Taro Kono, Minister for Foreign Affairs, Japan put it, “The IRENA Assembly gives Japan a chance to adopt innovative solutions to engage the advanced technology and power of our innovation to address renewable energy.”

Despite its low starting point, there are reasons to expect renewables to comprise a larger share of the transport fuel mix in the future. According to IRENA’s The Renewable Route to Sustainable Transport: A working paper based on REmap, between 2015 and 2016, the number of electric cars sold doubled (to around 1% of total car sales). Today, one out of every five cars sold in the Netherlands and Norway is an electric vehicle, and countries including China, France, Germany, India and the United Kingdom are setting electric mobility targets. China has announced an obligatory target of 10 percent EVs in total car sales by 2019, potentially representing a huge proportion of all new car sales. Rapid technological progress is leading to longer ranges on a single charge, faster charging times, and cost competitiveness with conventional cars.

Zhu Guangchao, Vice Chief Engineer, State Grid Corporation of China provided participants with an overview of the vastness of the Chinese power grid. China’s new hydro, wind and solar projects have transmitted more than 90TWh to centers across the country. At the end of 2017, China’s wind and energy installed capacity was 215GW, contributing to a 36% share of renewable energy in China’s mix at the end of the year. China is now also building the world’s largest fast smart charging grid, with 170,000 charging ports. These ports will integrate real-time data, price comparisons, and will use big data to enable real-time maintenance and response support.

As Mr. Guangchao put it, “Not only is China massively scaling-up its deployment of renewables, but also replacing coal, oil and gas powered facilities and industries with electricity.” – Zhu Guangchao, Vice Chief Engineer, State Grid Corporation of China

In a 2017 KPMG survey of over 1000 automotive executives from around the world, most agreed that the strong influence on the market exerted by the Paris Agreement could cause the share of electric mobility to rise to up to 30% of global automotive production by 2023.

Renewables, which are now cost-competitive with conventional fuels in many contexts, are well poised to generate the electricity needed for this. Indeed, IRENA’s REmap reports show that renewables could as much as quadruple within the transport sector by 2030 and go even further by mid-decade. This is driven by a strong business case for renewables, with private sector companies leading the way in many cases. Or, as Thierry Lepercq, Vice-President Innovation, Research and Technology, ENGIE put it, “Electric mobility is not just a vision, it’s business. We’re making money.”

Although early signs are promising, some challenges remain. For one, the infrastructure to power electric vehicles at scale is not yet fully developed. Charging technologies are not yet standardized, charging times are either too long to be widely practicable (conversely, ultra-fast charging technologies are expensive and energy intensive), and the impact of widespread charging on electricity loads and infrastructure is likely to exacerbate system stress.

Frederic Busin, Senior VP Development Customers and Services, EDF, summed up the challenges of adapting smart charging to the future needs of the electric mobility system, “By 2025 France will have nine million electric vehicles on the road. That means that 30GW of power that could be used at peak hour, which is 25% of current usage. We need to have terminals that are 100% automated in order to manage this demand.”

Improved battery technologies will thus play a critical role in the future potential of electric vehicles, and on the ability of renewables to provide the required energy.

Driven by technology improvements and rising demand, battery electricity storage systems have been growing exponentially in recent years. This has led to rapid cost reductions. In Germany, for instance, household-scale lithium-ion battery costs have fallen by over 60% since the end of 2014.

Better batteries will not only improve vehicle ranges between charges, but they will also help integrate higher shares of variable renewable power by providing the requisite flexibility to balance supply and demand (Electricity Storage and Renewable Energy: Costs and Markets to 2030, IRENA). So-called vehicle-to-grid (V2G) technology, which allows car batteries to support and interact with renewables-based power systems, holds tremendous promise. With V2G technology, electricity not only flows from the grid to the EVs to charge them, but it can also flow from the EV injecting electricity into the grid.

Delegates highlighted an interesting convergence of renewables with digital technology and artificial intelligence, “Autonomous driving is a major driver of electrification. A new systems-driven transportation paradigm is emerging where you don’t own cars but summon autonomous ones.”, as Martin Keller, Director, NREL put it. The future of our cities is emerging, with full, electric autonomous mobility. Those changes are driven by affordable electric mobility today.

One thing that is certain is that e-mobility can significantly contribute to reducing local air and noise pollution. IRENA’s analyses indicate that if air polluting emissions from conventional vehicles—nitrous oxide, volatile organic compounds, and others—were valued by their impact on human health and agricultural crops, external global costs from use of fossil fuels in the transport sector would be in the range of USD 460 billion to USD 2.4 trillion per year, based on 2010 data.

IRENA Director-General Adnan Z. Amin reminded participants that the business case for renewables is inescapable, and that the global conversation is no longer about Global North and South, about ODA, or about building new technology. The technology is available, private sector investment is happening, and policies exist. All that’s needed is to put them together in the right way and, as we have seen with many countries where renewables are taking off, significant change will happen.

In closing, the IRENA Director-General reminded delegates, “The energy transformation will not be a simple, linear thing. We must create the pool of knowledge, expertise and understanding so that all countries can make an informed choice about their energy future.” Global platforms like IRENA are vital to this process.