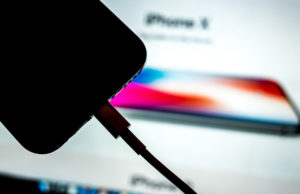 One of the biggest stories in consumer electronics right now is Apple’s secret throttling of older iPhone models with aging batteries. The company misled customers for years as “conspiracy theorists” claimed Apple was intentionally slowing down older iPhone models in order to force people to upgrade. While Apple contends that the reason behind the throttling is to increase battery life and prevent unexpected shutdowns, the company has indeed been intentionally limiting the performance of its iPhones as they age.

Lithium ion batteries lose capacity over time, and Apple’s iOS software automatically slows performance once capacity is degraded to a certain point. But what if there was a way to easily restore these aging batteries almost to their original capacities? A groundbreaking new invention can do just that, and it could end up being a game-changer for consumer electronics, electric cars, and more.

There is no such thing as a lithium-ion battery that maintains its full capacity over time. As these batteries are charged and drained, the cells that store electricity slowly begin to deteriorate. Li-Ion batteries are typically good for between 300 and 500 full recharge cycles before capacity drops to 80-85%, and degradation continues from there. For the time being, there is no way to easily and effectively restore these batteries to their original capacity.

What does this mean for the millions upon millions of devices that are powered by lithium batteries? It means that the amount of time in between charges decreases continually, so they last for a shorter amount of time per charge. This is true of everything from smartphones and laptops to electric cars. The only way to restore the battery capacity in a device is to remove the old degraded battery and swap it out with a new one — though that may change in the near future.

A researcher from Nanyang Technological University (NTU) in Singapore claims to have invented a device that can refresh Li-Ion batteries, and it could be a game-changer for any industry that involves battery-powered devices. What’s more, this technology could lead to a dramatic decline in the number of batteries that need to be produced and disposed of, which would obviously have a huge positive impact on the environment.

Professor Rachid Yazami says that his invention is capable of restoring an old lithium battery to up to 95% capacity in as little as 10 hours. What’s more, it could be reused on the same battery every few years as capacity continues to drop. The scientist says his invention could be used for consumer electronics like iPhones, but he sees it playing a much larger role for electric vehicles.

“People don’t change their cars as often as they do smartphones – some would change a phone every two years, but you would want a car to last for more than 10 years,” Yazami told Singapore-based news site The Straits Times.

The invention works by adding a third electrode to the two poles already present in every Li-Ion battery. This third electrode then drains residual lithium-ions from one of the poles, thus removing “rock content” that prevents battery cells from storing more electricity. The researcher says that he already built and tested a prototype smartphone battery last year using this new technology.

Professor Yazami presented his invention at the International Battery Seminar last year, and he says he has received interest from a number of companies including Apple, Samsung, and Panasonic.