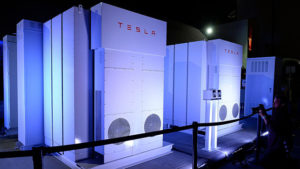 One of the most important uses is in demand-charge management, where large energy-intensive customers buy power when electricity is cheap and store it for use at peak times when power is most expensive. For power utilities and grid operators, batteries are being paired with renewables, to smooth out wind and solar farm output and to stabilize the difference between demand and supply.

The growing interest in grid-scale battery farms stems from the need to ensure power grid stability as reliance on intermittent renewable power grows.
Grid-connected energy storage capacity could increase more than nine-fold, from just 3 gigawatts (GW) in 2016 to 28 GW by 2022 and nearly double to 52 GW by 2025, boosted by rapidly falling prices of Lithium-ion batteries to below $200 per kilowatt-hour by 2019.
Lithium-ion batteries, which currently account for around 95 percent of all battery energy storage installations, are the chief beneficiaries of falling prices as ABB, Tesla, Toshiba, and Panasonic, ramp up production to achieve economies of scale.

In the not-too- distant future, with the growth in renewable power generation and associated increase in demand for energy storage, producers such as America’s Tesla and China’s BYD could locate giant Gigafactories in India. Notable examples of grid-scale battery energy storage taking-off include the U.K., which increased capacity by 60 percent in 2017 to 100 MW (megawatts), much of which is co-located with generation, both renewable and non-renewable. In England, in Barrow-in-Furness, a 49 MW battery farm is due to open soon and in Escondido, California, a 30 megawatt energy storage facility, capable of storing up to 120 megawatt hours of energy, the energy equivalent of serving 20,000 customers for four hours is already online.

On the other side of the world, Tesla has recently completed a 100 MW lithium ion storage facility in South Australia. Elsewhere, South Africa’s main utility, Eskom, has identified a need for as much as 2,000 MW of energy storage on its networks to accommodate the expansion of renewable power from independent power producers. To find the most suitable battery storage technology Eskom has opened a testing facility in Johannesburg. While in India, AES is planning to build the country’s first grid- scale battery with a capacity of just 10 MW.

Grid- scale battery technologies are dominated by lithium ion, but others, such as nickel metal hydride and flow batteries, are becoming increasingly commercially viable. Lithium ion, is the most common rechargeable grid-scale battery technology on the market, which first became commercially available in the early 1990s. This technology is growing in popularity due to its lightweight, high energy density, and ability to recharge.
The nickel metal hydride battery, builds on early innovations derived from nickel cadmium rechargeable batteries. Though similar in many ways to lithium ion batteries, their use is very limited in grid scale energy storage. In contrast, rechargeable flow battery technology is based on two chemicals dissolved in liquid, separated by a membrane through which an ion exchange occurs and this generates an electric current.
Flow battery technology offers a long life cycle, flexible capacity and much higher power densities than the more popular lithium ion battery. As a result, this makes them better for applications where rapid charge and discharge takes place over a short time period, such as in frequency response services and demand spike management. The Jacobi Medical Centre in New York City has installed such a flow battery.
There are other battery technologies in the early stages of development, including zinc-air, zinc-bromide and molten-salt sodium-sulphur batteries. In Japan, two molten-salt sodium-sulphur battery projects of 34 MW and another of 235 MWh are underway at a Wind Development project in Aomori Prefecture.

As with all new technology, the availability of funding is crucial. In an interview with Richard Goodfellow Head of Energy and Utilities Group at Addleshaw Goddard LLP, he explains, “in order for investors to make money, market regulations need to be reformed. Without reform, much investment comes from operator’s existing resources.“ Not only is a wider pool of investors needed, but investors must be willing to invest over the long-term, over a 5 to 7 year period for real take-off in production. However, the rapid evolution of this technology, which is capable of making existing investment suddenly obsolete, is perhaps discouraging potential investors, other than a small group of pioneers.

What the future may hold

The challenge for potential investors is being able to value the economic benefits of an investment in grid-scale battery storage, such as energy security and insurance against power cuts. However, if successful, Tesla’s Australian project could mark the beginnings of take-off. A low-carbon world, in which renewable power dominates, requires an efficient technology of energy storage and today, that seems likely to be found in batteries.