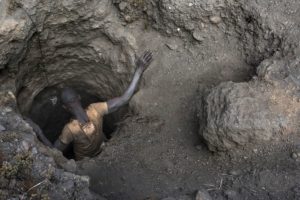 The Democratic Republic of Congo, supplier of two-thirds of the world’s cobalt, aims to more than double royalty charges. That’s bad news for electric cars: the metal is a key battery ingredient. But the move could backfire in the long-term by accelerating an already frantic search for alternatives.

Cobalt has been at the heart of the green fever in metals markets over the last year. Like lithium, nickel and even copper, its outlook has been transformed by ambitious forecasts for the growth of electric vehicles. The price of what was once an ingredient for aerospace superalloys has gone from under $35,000 per tonne a year ago to over $75,000.

The problem is there is simply not enough of it. Glencore , a leading producer of the metal, said last month that to meet the needs of the electric fleet expected to be on the road by 2030, demand for cobalt will be more than three times the amount supplied in 2016. The issue is that supply cannot be cranked up fast enough. Cobalt is a by-product of digging up nickel and copper, and virtually never mined for its own sake. It is also unevenly distributed – hence Congo’s dominant role. Big miners cannot easily go elsewhere to crank up production, nor can they simply snap up smaller players or speed up projects.

Given this, it would seem logical for Congo, which dominates both current and future supply, to exploit its current advantage to the hilt. In the near term, miners and carmakers will have little choice but to pay up. Volkswagen, for one, failed in its push to lock in supply.

But though tempting in a country that has squeezed miners before, this hike ignores one thing: the market is already seeking to reduce its dependence. Cobalt was a potential bottleneck for green technology even before Kinshasa’s latest gambit. A sharp tax increase will accelerate moves to work around it.

It also aggravates miners’ and investors’ anxiety about working in the DRC, one of the world’s poorest countries, where questionable practices in smaller mines already create headaches.

It will be hard to replace cobalt in the short-term – the current battery chemistry of choice requires it. But there could, for example, be a push to stick for longer with existing alternatives in price-conscious markets like China: lithium-iron phosphate, for example. Substitution is inevitable.