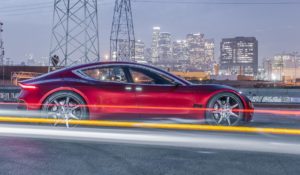 A former chief designer for Aston Martin is working on a new solid-state battery design that could be vastly superior to the currently available lithium-ion batteries used in electric cars.

Henrik Fisker, a former chief designer for Aston Martin, claims that he will soon revolutionize the world of electric cars with a new, superior battery. After leaving the luxury car brand, Fisker started his own company and has filed patents on a new type of solid-state battery, which can be charged faster and has greater capacity than leading lithium-ion batteries, at least in theory.

In an interview with The Irish Times, Fisker said that “Everyone has gone down a road of working on what we call thin-film sheet batteries. One of the early scientists who worked on these was Dr Fabio Albano.” When Albano left the company Sakti3, he brought his ideas for the next development in battery technology to Fisker.

“The breakthrough that Fabio brought to me, just over a year ago, was a development of the solid-state battery, and he said that he wanted to bring this battery into Fisker, and he really wanted to get it into a vehicle. He believed that he was close to a breakthrough,” Fisker told The Irish Times.

For now, the details of this collaborative design remain undisclosed. However, we do know that it will be able to hold 2.5-times the energy of a traditional lithium-ion battery and it will charge at a much faster rate. Fisker even suggests that this battery could be charged in as little as one minute.

In addition to these advantages, this mysterious solid-state battery would outprice competitors like Tesla that still use conventional lithium-ion batteries for their electric cars. According to Fisker, “the unique thing about our battery is that the solvent that we use to build the battery is the cheapest one you can get – water.”

So far, the main downside to the concept is that it doesn’t technically exist in real life. But, should the theoretically sound science behind this design amount to a commercially-viable product, the lithium-ion batteries that currently power electric vehicles (EVs) could give way to these batteries and EV capabilities and range could seriously advance.