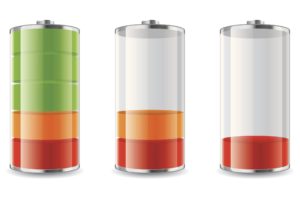 If any press is good press, then the lithium-ion battery has had a great few weeks in the spotlight at the center of Samsung’s Galaxy Note 7 smartphone failures. Despite the concern over the devices bursting into flames — the blame of which is probably better directed at one of the device’s other components — the lithium battery is in no danger of losing its spot atop commercial battery technologies anytime soon. The ubiquitous technology meets the two most important criteria for batteries used in consumer electronics and electric vehicles: It can store large amounts of energy for its size, and it can be recharged thousands of times. But if batteries are ever to reach their full potential as a geopolitically disruptive technology, they still have a long way to go in improving energy density and lifetime and, perhaps more important, reducing cost. In the long term, as more abundant elements are adapted for wider use in batteries, they may eventually force the lithium-ion battery from its throne. Until then, lithium will continue to play an integral role in powering our world.

The concept of the battery has existed for centuries. But compared with exponential progress in the computing industry, the field of battery technology has advanced at a slower rate (though the leaps in computing capability demand better and more batteries to power proliferating consumer electronics). This is in large part because of the constraints that engineers, chemists and physicists must work within when developing new battery configurations. There are three basic parts to a traditional battery: the anode, the cathode and the electrolyte. When discharging (releasing stored energy), electrons move from the anode to the cathode, facilitated by the electrolyte; when charging, the subatomic particles move in the opposite direction.

Alessandro Volta invented what is widely considered the first modern battery in the early 19th century. Today, the lead-acid battery helps to power traditional motor vehicles, and until the 1990s, the zinc-carbon battery, followed by the alkaline battery, have been the stalwarts of the disposable battery technology that powers many consumer electronics. The advent of the lithium-ion battery, used in cellphones and computers, traces back more than 30 years to John Goodenough, who pioneered lithium-cobalt-oxide batteries while at Oxford in 1980. But it was not until Sony commercialized the product in 1991 that the lithium-ion battery began its ascent.
To improve energy density and other important properties, researchers in government labs, businesses and academia are working, often collaboratively, to come up with the next generation of lithium-ion batteries. But the intricate combination of materials science, physics and engineering can at times make battery development seem more like an art than a science. Working with a limited set of chemical elements and configurations, scientists have a finite set of options with which to concoct a battery. Extensive research has been performed to determine which elements will pair best with lithium in the cathode. Cobalt, nickel and manganese are the most common materials, and each company guards its exact formulations.

But the lithium-ion battery as we know it is approaching its limits. Eventually, it will fall short of meeting rapidly growing and shifting market demands, and alternative solutions will be needed. The transition will be difficult and lengthy; it can take five years or more to configure a plant to produce batteries on a commercial scale, depending on the changes between different generations of batteries. As the demands of current technology begin to exceed the capabilities of existing batteries, however, the drive to expand beyond the lithium-ion battery, and the investment behind such efforts, will increase. In time, the technological leaps made in labs around the world will bring new kinds of batteries to the market.

Increasing energy density while maintaining or extending lifespan and reducing cost will remain the chief priorities for developing new formulations, in keeping with consumer demands. The transportation sector has pursued the development of several types of batteries to propel electric vehicles, including lead-acid, nickel-cadmium and nickel-metal hydride combinations as well as lithium-ion. The sector is working toward developing a battery with an energy density of 400 watt-hours per kilogram (Wh/kg) to extend the driving distance for electric vehicles. (Currently, the energy density of lithium-ion batteries in many electric vehicles ranges from 95 Wh/kg to 200 Wh/kg.) In addition, introducing a solid electrolyte to replace more common — and often flammable — liquid or gel ones could increase safety.

Other adjustments in configuration and composition are also showing promise. Although graphite is currently the standard material for anodes in lithium-ion batteries, scientists are exploring other materials. Researchers have devoted significant time and attention to developing silicon-doped anodes, for instance. Because the batteries’ performance degrades over the course of repeated chargings, they may be best suited for products that do not require a long battery lifetime. Nonetheless, given its advanced stage of development, this type of battery will be one of the earliest new formulations to reach the market.

Using lithium metal in the anode offers another alternative. Lithium-sulfur batteries exploit the desirable properties of sulfur: abundance and low cost. The high theoretical capacity of this type of battery has led Argonne’s Joint Center for Energy Storage Research — one of the premier facilities for battery development — to hail lithium-sulfur as the next commercially viable combination. In fact, a lithium-sulfur battery for solar storage is expected to hit the market in a limited release before the end of the year. By 2035, industry analysts expect that lithium-sulfur batteries could meet nearly a third of demand in the electronics sector. Similarly, lithium-air batteries, which also use lithium as the anode, have garnered increasing interest. The design differs fundamentally from lithium-ion batteries while still taking advantage of the metal’s desirable properties. As the battery discharges, the lithium reacts with oxygen in the air. Boasting theoretical energy densities 10 times those of existing lithium-ion batteries, the lithium-air battery is often touted as the holy grail of battery technology, though concerns over lifespan and safety have impeded its development. Even so, the possible benefits of lithium-air batteries are too great to ignore, and research into the technology will continue.

Of course, lithium is a central component in all these configurations. Lithium owes its prevalence in battery technology in large part to its small atomic size. Lithium ions can intercalate (fit) into a battery’s electrode without significantly changing its size or configuration, a trait that will be hard to replicate with other materials. Sodium and magnesium — which have similar electronic properties as lithium, albeit in a larger atom — could be suitable substitutes.

Given their relative abundance and low cost, sodium and magnesium are attractive options for developers looking to bring down the price of batteries. Though their atomic size has proved a hindrance to reaching high energy densities, advancements in nanotechnology have helped reduce these limitations. Eventually, sodium- and magnesium-based batteries could become viable successors to the lithium-ion battery, particularly in electric grid storage. Because storage grids are stationary, battery size is not as important a consideration as it is in consumer electronics or electric vehicles. At the same time, however, the market for grid storage, a developing sector, is still small and crowded. Sodium- and magnesium-based batteries vying for a place in the market will have to compete not only with lithium-ion technology but also with more established alternatives, including redox flow batteries, sodium-sulfur and other molten salt batteries, and flywheels.

In a given week — and sometimes on a given day — numerous publications tout the next great battery. The achievements described in these articles should not be ignored; after all, they represent necessary and potentially important benchmarks in the field. But they must be taken with a grain of salt. Laboratory discoveries, especially in battery technology, are difficult to adapt for production on a commercial scale.

Battery technology has the potential to change the geopolitical map, and not just by powering our increasingly connected world. If electric vehicles and variable renewable power become economically competitive with existing technologies, they could contribute to a shift in the primacy of hydrocarbons in global energy, economics and politics. Technology is already headed in that direction — costs are declining, and performance is increasing. But the transformation will not happen overnight. However slowly they emerge, developments in energy storage technology are necessary to pave the way for a future in which renewable energy accounts for a much larger share of global electricity production. And someday, abundance and cost will allow base elements such as sodium or magnesium to overtake lithium as the key component to this vital technology.