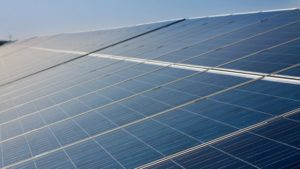 Photosynthesis: fundamental mechanism for life on this planet, scourge of GCSE biology students, and now a potential way to fight climate change. Scientists are working hard to develop an artificial method that mimics how plants use sunlight to transform CO2 and water into something we can use as fuel. If it works, it’ll be a win-win scenario for us: not only will we benefit from renewable energy produced in this manner, but it could also become an important way to reduce CO2 levels in the atmosphere.

However, it took plants billions of years to develop photosynthesis, and it’s not always an easy task to replicate what happens in nature. At the moment, the basic steps in artificial photosynthesis work, but not very efficiently. The good news is that research in this field is picking up pace and there are groups around the world making steps towards harnessing this integral process.

Photosynthesis is not just about capturing sunlight. A lizard bathing in the warm sun can do that. Photosynthesis evolved in plants as a way to capture and store this energy (the “photo” bit) and convert it into carbohydrates (the “synthesis” bit). Plants use a series of proteins and enzymes powered by sunlight to release electrons, which in turn are used to convert CO2 into complex carbohydrates. Basically, artificial photosynthesis follows the same steps.

“In natural photosynthesis, which is part of the natural carbon cycle, we have light, CO2 and water going into the plant and the plant makes sugar,” explains Phil De Luna, a PhD candidate working at the Department of Electrical and Computer Engineering at the University of Toronto. “In artificial photosynthesis, we use inorganic devices and materials. The actual solar-harvesting portion is done by solar cells and the energy-conversion portion is done by electrochemical [reactions in the presence of] catalysts.”

What really appeals with this process is the ability to produce fuel for long-term energy storage. This is so much more than what current renewable energy sources can do, even with emerging battery technology. If the sun is not out or if it’s not a windy day, for example, solar panels and wind farms simply stop producing. “For prolonged seasonal storage and storage in complex fuels, we need a better solution,” says De Luna. “Batteries are great for day to day, for phones and even for cars, but we’re never going to run a [Boeing] 747 with a battery.”

When it comes to creating solar cells – the first step in the process of artificial photosynthesis – we already have the technology in place: solar-power systems. However, current photovoltaic panels, which are typically semiconductor-based systems, are relatively expensive and inefficient compared to nature. A new technology is needed; one that wastes far less energy.

Gary Hastings and his team from Georgia State University, Atlanta, may have stumbled on a starting point when looking at the original process in plants. In photosynthesis, the crucial point involves moving electrons over a certain distance in the cell. In very simple terms, it’s this movement caused by sunlight that is later converted into energy. Hastings showed that the process is very efficient in nature because these electrons cannot go back to their original position: “If the electron goes back to where it came from, then the solar energy is lost.” While this possibility is rare in plants, it happens quite frequently in solar panels, explaining why they’re less efficient than the real thing.

Hastings believes this “research is likely to advance solar-cell technologies related to chemical or fuel production”, but he’s quick to point out that this is just an idea at the moment and this advance is unlikely to happen any time soon. “In terms of the fabrication of a fully artificial solar-cell technology that’s designed based on these ideas, I believe that technology is further off in the future, likely not within the next five years even for a prototype.”

One problem researchers believe we are close to solving involves the second step in the process: converting CO2 into fuel. As this molecule is very stable and it takes an incredible amount of energy to break it, the artificial system uses catalysts to lower the energy required and help speed up the reaction. However, this approach brings its own set of problems. There have been many attempts over the past ten years, with catalysts made out of manganese, titanium and cobalt, but prolonged use has proven itself a problem. The theory may seem good, but they either stop working after a few hours, become unstable, slow or trigger other chemical reactions that may damage the cell.

But a collaboration between Canadian and Chinese researchers seems to have hit the jackpot. They found a way to combine nickel, iron, cobalt and phosphorus to work in a neutral pH, which makes running the system considerably easier. “Since our catalyst can work well in neutral pH electrolyte, which is necessary for CO2 reduction, we can run the electrolysis of CO2 reduction in [a] membrane-free system, and hence the voltage can be decreased”, says Bo Zhang, from the Department of Macromolecular Science at Fudan University, China. With an impressive 64% electrical-to-chemical power conversion, the team are now record holders with the highest efficiency for artificial photosynthesis systems.

For their efforts, the team reached the semi-finals in the NRG COSIA Carbon XPRIZE, which could win them $20 million for their research. The aim is to “develop breakthrough technologies that will convert CO2 emissions from power plants and industrial facilities into valuable products” and with their improved artificial photosynthesis systems, they have a good chance.

The next challenge is scaling up. “The biggest issue with what we have right now is scale. When we scale up, we end up losing efficiency,” says De Luna, who was also involved in Zhang’s study. Luckily, researchers haven’t exhausted their list of improvements, and are now trying to make catalysts more efficient through different compositions and different configurations.

There’s certainly still room for improvement in both the short and long term, but many feel artiﬁcial photosynthesis has the potential to become an important tool as a clean and sustainable technology for the future.

“It’s incredibly exciting because the field is moving so quickly. In terms of commercialisation, we’re at the tipping point,” says De Luna, adding that, whether it works “is going to depend on a lot of factors, which include public policy and the adoption by the industry to accept renewable energy technology.”

Getting the science right is really only the first step, then. In the wake of research by the likes of Hastings and Zhang will come the crucial move to absorb artificial photosynthesis into our global strategy around renewable energy. The stakes are high. If it pulls through, we stand to win on two fronts – not only producing fuels and chemical products, but also reducing our carbon footprint in the process.