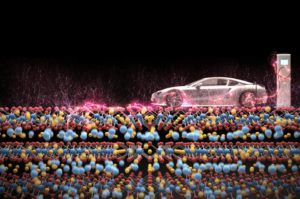 Scientists from Stanford University, two Department of Energy national laboratories and Samsung have teamed up to study lithium-rich batteries in the hope of creating super-batteries that will help power electric cars for up to 50% farther. Up until now, scientists did not know why these super-batteries lost voltage very quickly. However, new research has found that this decrease in performance is due to changes in the atomic structure of the cathode after continual charging and discharging cycles. Consequently, the team of scientists decided to analyze these changes in so that they could find out why lithium-rich batteries quickly lost voltage. By knowing this, it is hoped that this change in atomic structure can be controlled so that battery performance can be optimized.

Before I delve into the scientific research carried out by this team of scientists I’d like to give a quick explanation of how batteries work. Lithium-rich batteries are batteries which contain more lithium in the cathode than an average battery so you can think of it as being lithium-dense. As a result, the battery has a higher ‘power’ capacity and will last longer and can be made smaller. In general, batteries consist of two electrodes: a cathode and an anode which are made of different materials. There is a liquid that exists between the electrodes, known as an electrolyte which is a chemical medium that lets ions flow through it. When the battery is connected to a device, a chemical reaction is initiated and electrons move between the electrodes. Specifically, electrons and positive ions are formed at the anode. These ions flow into the electrolyte and the electrons travel along the path of least resistance which is via the external circuit. Electrons do not pass easily through the electrolyte so traveling via the external circuit is ideal and this is how electrical current is made by a battery. At the cathode, the electrons combine with the ions in the cathode. Non-rechargeable batteries can only sustain this reaction for a certain amount of time, whereas rechargeable batteries use a chemical reaction which is reversible. While charging a rechargeable battery you are essentially reversing the chemical reaction and returning it to its full chemical potential. From this, batteries can be thought of as objects that convert chemical energy into electrical energy.

Consequently, the researchers used a myriad of x-ray techniques to study the structure of the lithium-rich cathode. SLAC’s Stanford Synchrotron Radiation Lightsource (SSRL), Lawrence Berkeley National Laboratory’s Advanced Light Source (ALS) were two facilities used to carry out these experiments. On top of that, theorists from Berkeley Laboratory’s Molecular Foundry helped guide the experimentalists by telling them what they should expect to see and also helped analyze the results too. Samsung’s Advanced Institute of Technologydonated cathodes to this research which were similar to those found in electric vehicles. This is a bonus since any valuable findings from this research will only lead to commercial benefits.

In lithium-rich batteries, there are normally layers of transition metal oxides like nickel, manganese or cobalt combined with oxygen which are covered with lithium. This addition of lithium is what leads to greater ‘powering’ capacity, with up to 50% greater performance. The x-ray data, however, revealed that as the battery was charged and discharged the movement of ions and electrons distorted the structure of the cathode, leading to a decrease in performance. Their findings are summarized in a Nature Communications report.

From here, the scientists are working hard to design battery materials that do not deform in this way. These super-batteries might be in our electric vehicles very soon and they’ll be traveling further than ever.Print