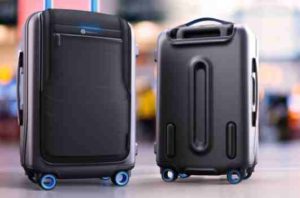 If you own smart luggage, you should test its intelligence as soon as possible. The IQ exam that matters – if you can take out its lithium battery.

On Monday, airlines including American Airlines, KLM, Virgin Atlantic, Delta, United and Southwest will no longer allow passengers to fly with smart bags that contain non-removable lithium batteries. The policy change applies to checked and carry-on bags that require lithium batteries to power high-tech features such as a USB charging station and a location tracker.

“Customers who travel with a smart bag must be able to remove the battery in case the bag has to be checked at any point in the customer’s journey,” American Airlines said in a statement. “If the battery cannot be removed, the bag will not be allowed.”

The rule springs from safety concerns. Lithium metal and lithium ion/polymer batteries are susceptible to emitting smoke, catching fire and even exploding. Between March 1991 and May 2017, the Federal Aviation Administration documented 160 incidents involving lithium batteries that were being transported as cargo or baggage.

The agency already prohibits passengers from checking spare lithium batteries used for personal electronic devices and portable rechargers, as well as several lithium-powered items such as e-cigarettes and vape pens. The FAA permits the items inside the cabin.

The airlines are not snubbing all smart bags: Luggage with extractable batteries is permitted, with some oversight. Passengers who check their smart carriers must remove the battery and tote it on board. As carry-on, the battery can stay put but must be turned off, per FAA protocol. However, if a flight attendant decides to gate-check the bag, you must remove the battery before it goes into the belly of the plane.

Smart luggage performs more than beast-of-burden duties. Depending on the model, the brainy bag might come with USB ports for charging gadgets, GPS tracking, electronic locks and built-in digital scales. One company called Modobag allows travellers to zoom around on their luggage like a scooter, which tops out at 8 mph.

Many manufacturers, such as Away, Barracuda, G-Ro, Raden, Arlo Skye, Travelpro and Heys (the only maker to use AAA batteries), sell smart luggage that complies with the new rule. The ones that do not are rethinking their designs.

The rule came earlier than expected. The International Civil Aviation Organisation (ICAO), the UN agency that sets aviation safety standards and recommends practices for more than 190 countries, had decided to start restricting smart luggage next January. However, the International Air Transport Association (IATA), which represents about 275 airlines worldwide, instituted the ban a year early.

An IATA spokesman said the organisation’s members will follow its recommendations starting Monday. Participants include major carriers such as United, JetBlue, Alaska and Hawaiian, as well as many smaller airlines, including Slovenia’s Adria Airways, Egypt’s Nile Air and Iran’s Kish Airlines.

Consider yourself warned: If you arrive at the airport with the luggage non grata, the airline will not permit the piece on board. You will have to repack your belongings in your secondary bags or purchase new luggage at the airport – a costly solution for a careless mistake.