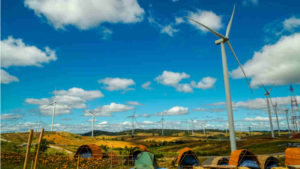 Following through on its recent commitments to combat climate change, China is now on track to become the global leader in the development, financing, and exportation of clean energy technology.

According to a new report from the Institute of Energy Economics and Financial Analysis (IEEFA), China has made further progress since 2016 due to continued investment in improving the infrastructure needed to transport locally produced energy and equipment. The nation’s Belt and Road Initiative (BRI) commenced in 2013 to create travel routes and power grid connections within China and to other areas of the continent, often following ancient trade paths such as the silk road. In 2017, funds allocated to the BRI surpassed $31 billion.

In addition, Chinese power companies have expanded their presence overseas. A Chinese wind power developer is now the largest in the world, and several hydroelectric power companies have acquired contracts for large-scale utility projects in Latin America, Africa, and Asia. The IEEFA calculates that over $44 billion was spent on international wind, solar, and hydroelectric farms in 2017.

Unlike the current US government, which has lifted environmental moratoriums on coal mining, China has been shifting away from the fossil fuel. In August, the country’s largest coal mining company merged with one of the major power utility companies. The resulting group, China Energy Investment Corp, is now the largest power supplier in the world and no longer needs to pit coal against clean power sources to generate revenue.

China also continues to lead on solar cell and battery manufacturing. Chinese companies produced 60 percent of the solar cells sold in 2017, and emerging technology is slated to produce a battery with a superior capacity to those made by Tesla (121 gigawatt-hours of storage vs 35) by 2020. One reason for the dominance in battery research is that China obtains 62 percent of the world’s cobalt through state-run mining operations across the world. (The environmental impact of rare mineral mining, however, is a whole separate can of worms.)

“The clean energy market is growing at a rapid pace and China is setting itself up as a global technology leader while the US government looks the other way,” said report co-author Tim Buckley in a statement. “Although China isn’t necessarily intending to fill the climate leadership void left by the US withdrawal from Paris, it will certainly be very comfortable providing technology leadership and financial capacity so as to dominate fast-growing sectors such as solar energy, electric vehicles, and batteries.”