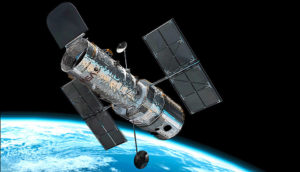 Sending metal parts up to orbiting satellites and rockets is a slow and expensive process. So why not put the factory in orbit too?

It’s not as outlandish as it might sound. Made In Space, a Mountain View, California-based company, plans to use 3-D printing to manufacture metal parts in space. The technology is already used here on Earth by companies such as General Electric Co. and Siemens AG to build components for everything from jet engines to rockets. Cosmic applications are expected to gain traction as space travel expands.

The drive to fabricate metal parts in space comes as companies guided by Elon Musk and Jeff Bezos work to make extraterrestrial travel less expensive, fueling an emerging economy to service the industry. According to Andrew Rush, chief executive officer of Made In Space, the company would function as the “hard hat” construction worker to fashion ready-to-use products from aluminum, steel and titanium for in-orbit use.

Printing metals parts makes sense because of the challenges in sending “materials and people in space,” Rush said in a telephone interview last week. The goal is to “help people live and work” in orbit.

Industrial 3-D printing, also known as additive manufacturing, uses lasers and other technology to fuse ultra-thin layers of material such as metal powder or polymers to fabricate parts. The U.S. National Aeronautics and Space Administration has been among the leaders in 3-D printing, partnering with Made In Space to build its first plastic parts in 2014 on the International Space Station.

Made In Space, which employs 47 people, currently uses a 3-D printer about the size of a microwave oven on the space station to make plastic parts for antennas, radars and satellites. The company may start metals printing over the next 24 months. The parts are used by government agencies and aerospace companies.

The printers on the space station are operated from the ground, and print orders are sent digitally, according to the company. The only crew involvement is the removal of parts from the print bed when prints are completed.

While it may not significantly shift the outlook for metals demand in the near-term, the 3-D printing process back on Earth’s soil is gaining traction. It’s changing how products are designed, engineered and made, and has significant production turn-around time and cost benefits for users, Anthony Forcione, senior equity analyst at Loomis Sayles & Co., said in a blog post late last month.

Interest in space applications is brewing as President Donald Trump recently directed NASA to send American astronauts back to the moon, and as companies and countries explore ways to mine asteroids for precious and base metals.

Made In Space also plans to start a recycling technology system in the next year that will reuse plastic in orbit. The company will later use this as the blueprint for recycling metals, Rush said.