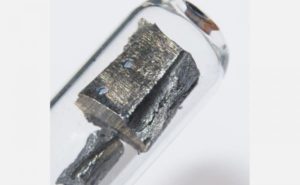 The global market for rare earth metals will be worth an estimated US$ 7362.8 million by 2026, according to Future Market Insights. This represents a compound annual growth rate of 8.5% for the period 2016 to 2026.
The increasing application of rare earth metals in several key end-use industries is expected to fuel their demand over the next few years. Major sectors such as energy and automotive are exhibiting a ‘tremendous’ amount of rare earth use while the growing popularity of electronic devices such as smartphones is also helping to propel demand for these metals.

Further takeaways from the report are that, by metal type, demand for neodymium will continue to grow at an ‘impressive’ rate in the coming years.

In 2016, neodymium accounted for some 38.4% value share of the market and is expected to record similar figures over the next couple of years.

Rare earth alloys such as Ni-MH batteries used in hybrid electric vehicles and other appliances are also expected to register ‘steady growth’ during the forecast period. The report’s authors point out that rare earths play a ‘crucial’ role in the development of cutting-edge technology for next-generation vehicles.