There’s no two ways about it — 2017 has been a magnificent year to be an Apple Inc. shareholder.

Since the calendar flipped to January, shares of Apple are up more than 50%, more than triple the return of the rest of the S&P 500 over that same time frame. But with Thanksgiving right around the corner this week, the thing Apple investors should be most thankful for might actually be the upside that’s still left in shares of Apple in the final stretch of the calendar year.

As Apple heads deeper into the seasonally strong holiday quarter, consumers are being greeted by a product catalog that includes a pair of popular new iPhone models, and analyst estimates that could make it the firm’s most profitable quarter in history.

But that’s not the immediate-term driver in shares of Apple right now.

Instead, it’s the price action that’s signaling buyers are still very much in control of things for this tech giant this fall.

To figure out how to trade it, we’re turning to the chart for a technical look. 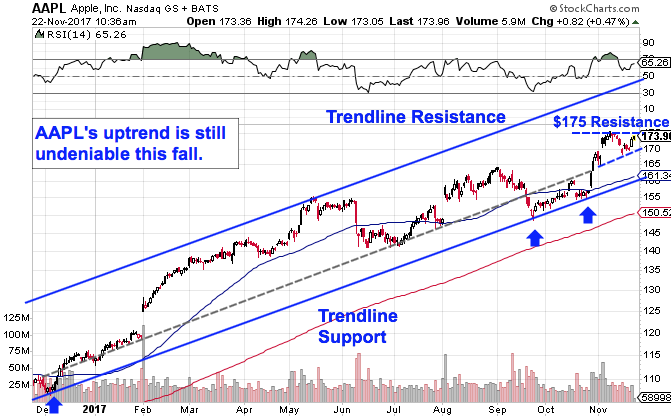 Glancing at Apple’s chart, it’s not hard to spot the overarching price trend in this big stock right now. Shares have been bouncing their way up and to the right in a well-defined uptrending channel since the end of last year — and that uptrend remains very much intact right now.

Shorter term, Apple is forming a pretty textbook example of an ascending triangle pattern, a bullish continuation setup, within the context of that uptrend. The ascending triangle is formed by horizontal resistance up above shares at $175, and uptrending support to the downside (formed by the dashed lines on the Apple chart above).

Simply put, as shares have bounced in between those two technical levels all month long, they’ve been getting squeezed closer and closer to a breakout through that $175 price barrier – once that happens, we’ve got a refreshed buy signal in shares. Apple is within grabbing distance of that $175 price tag today.

If you’re looking for a buying opportunity in shares of Apple, it makes sense to wait for shares to push through $175. On the other hand, if you already own this stock, it makes a lot of sense to hold on as we finish up November and head toward December. Long term, buyers are still clearly in control of the price action in this stock, and shares are on the verge of a new short-term buy signal as well.

There’s still a lot of upside left in Apple this fall.