This could be the start of something big for Ford Motor Co.

Shares charged more than 2% higher Tuesday, as investors absorbed strong September sales data, and prepared for the firm’s strategic update after the closing bell. New CEO Jim Hackett unveiled plans to shift its focus more towards SUVs and trucks – categories where the automaker is already finding success – as well as electric vehicles and driverless technology – areas where innovators like Tesla Inc. (TSLA) are beating Ford.

Ford also aims to boost its profit margins. That plan hinges on an effort to reduce materials costs by $10 billion, while also cutting engineering spending by $4 billion. It’ll do the latter primarily by getting rid of some passenger car models.

Investors like the plan so far — as of this writing, Ford shares are up slightly in pre-market trading.

But the bigger reason to like shares of Ford might not be the strategic update at all. Instead, in the short-term, investors should be paying attention to the major technical buy signal that just triggered in shares.

To spot the breakout, we’re turning to the chart: 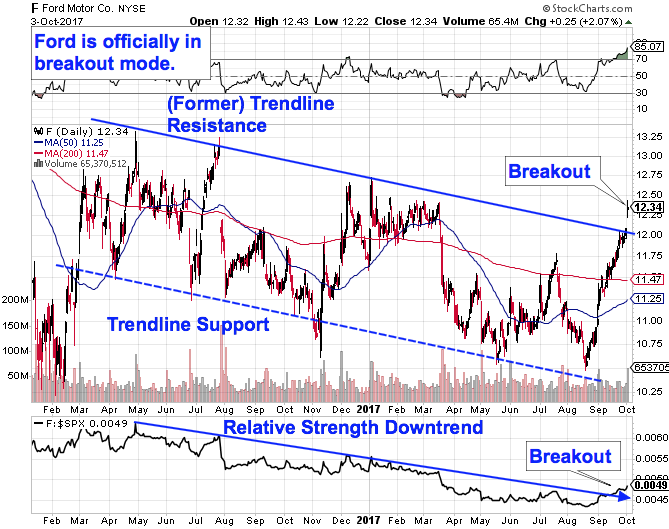 It doesn’t take a trading genius to spot the fact that Ford’s price action has spent most of 2017 stuck in a shallow downtrend. Thing is, all trends eventually come to an end – and Ford’s was teetering in make-or-break mode as recently as Friday.

Put simply, a breakout move through Ford’s trendline resistance would be an important signal that the uptrend in this Detroit auto giant is finally over, while a bounce lower would be an indication that investors should prepare for more downside. As of Friday, the path forward for shares wasn’t at all clear. But that all changed one trading session later following Ford’s Monday’s breakout.

Along with the price action, Ford’s relative strength line, the indicator down at the bottom of the chart, adds a piece of bullish confirmation that we’re witnessing the start of an important change in trend for shares: the downtrend in relative strength ended as well, signaling that Ford’s underperformance streak is giving way to a market-beating run.

If you don’t already own shares of Ford, now looks like a good time to start building a position as control of shares finally shifts from sellers back to buyers. Ford’s prior downtrend was a long-term price setup – and that gives today’s trend reversal equally long-term trading implications from here.